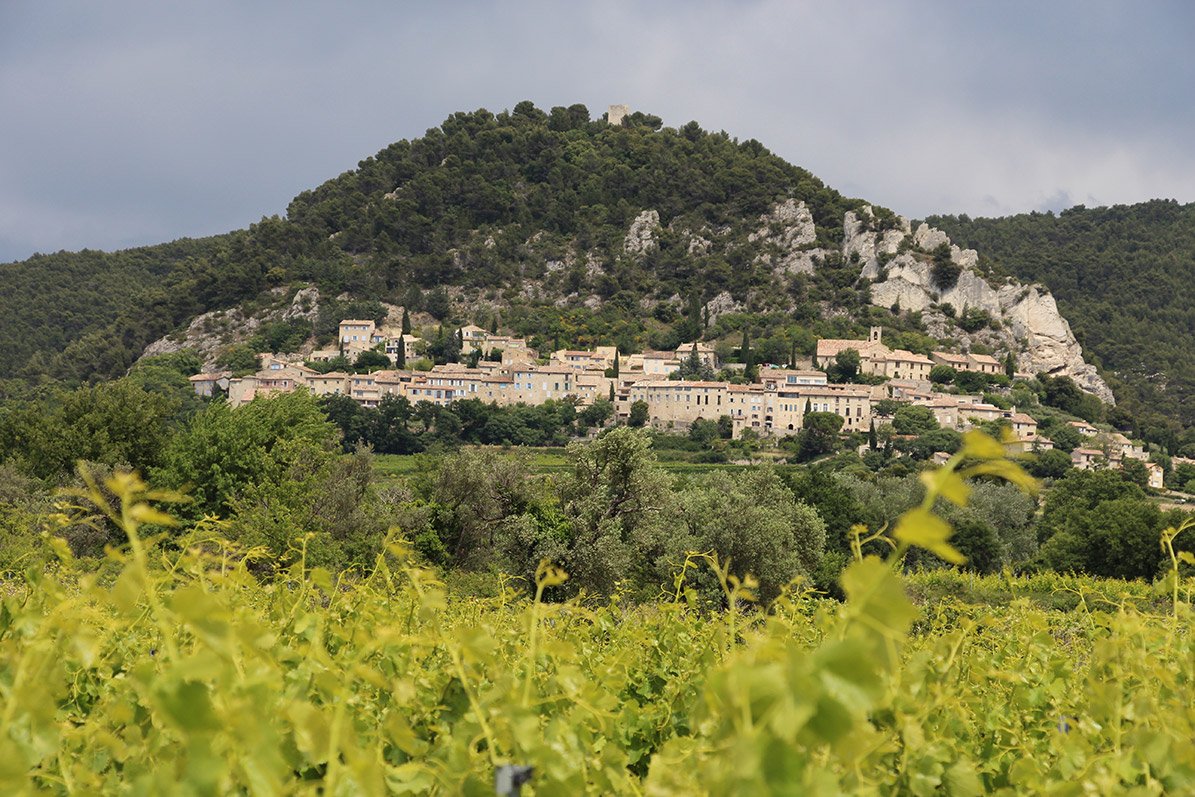 At Domaine Jean David, organic is a way of life, not a practice reserved for the fields. The age of extraction and chemical farming continues to lose ground, and Jean David, one of France’s humble and often overlooked heroes was ahead of the curve when he went full organic in 1979 (certified in 1987), a radical move at the time within a region overwrought by chemical farming in Provence, one of France’s main breadbaskets. One of the original “natural wine” guys, he split early away from technology in favor of nature.

Jean and his wife, Martine, are joyful, humble and welcoming. They live quietly and discretely in their beautiful limestone rock home, but have spent their lives outside of their time in the vineyards traveling and incorporating a well-rounded worldview into their daily lives. Always dressed in a clever mix of colorful countryside and retro French city fashion, Martine’s energy exudes that of someone half her age. And the soft-spoken Jean wears a lifetime spent in vineyards under the sun on his dark skin and large, strong and soft hands—a vigneron’s hands—built through a lifetime of winegrowing. Intimidating at first glance, usually with a cigarette hanging out of his mouth with an intense, attentive stare, he seems a tough, purebred, blue-collar vigneron. But once his soft, raspy voice flows with fluency in his southern French singing dialect, English, Spanish, or Italian he’s warm and welcoming, constantly laughing and smiling with regular short bursts of song. After five minutes of first meeting him it’s easy to feel you’ve known him all your life.

Jean’s wines capture the spirit of the Provençal countryside in a straightforward and honest way; no pomp, no pretention. They are true wines, their tastes conceded to the land from where they’re grown and the historical culture of its people. His red wines, a mixture of Grenache, Carignan, Counoise, Cinsault, Syrah, Mourvedre, and others are usually more red than purple, fresh and aromatic, rarely inky and black, and never overplayed. The different grape varieties are co-fermented with their stems and aged strictly in concrete and stainless steel; the only wood in the cellar is the roof and some walls. Sulfites are kept to a minimum with some wines with none at all. Most vintages, which can vary quite a lot thanks to climate change, the Côtes-du-Rhône Village (all Seguret fruit, but from vines younger than fifty years old) and the entry-level Seguret are fresh, like newly picked springtime cherries and berries, and maintain a solid core balanced with fine tannins and high frequency acidity. In the warmer years, the wines take a slightly darker cast, while still preserving bright and fresh fruit characteristics.

The whites are composed of Marsanne and Roussane and can be spectacular each vintage, especially when caught young. They make a minuscule amount of white wines and it’s worth the effort to try to get your hands on a few bottles. They’re unexpectedly fresh and bright, unlike most of the white wines in the area.

Like their maker all the wines here are fun on the surface, but with more time they can exhibit surprising depth and complexity. There’s a lot more to these wines than at first glance, especially for their humble price and appellation.

Tucked in the eastern hillsides of the Côtes-du-Rhône wine appellation, this small, ancient limestone rock village was first colonized by the Romans. In Provençal dialect, Seguret means “secure,” and it’s classified as one of the “most beautiful villages in France.” Upon arrival, one clearly understands its reputation for its natural beauty and its charming, narrow, shadowy cobble paths, dense with rock houses, quaint touristic restaurants and stores, and perches off the side of the village overlooking the valley toward the north, east and west.

Seguret is a small wine-producing village set on the eastern fringe of the Southern Rhône Valley, and overshadowed by the better-known wine appellations just to the west, Gigondas and Vacqueras, and further westward the most famous of them all, Châteauneuf-du-Pape. Seguret should be more famous, and I am happy to say that it’s not. It remains quaint and not overrun by tourists (at least in the off-season) with the occasional painter in street contemplating his strokes in an ever-changing shadowy setting, or a man sitting alone on the back of his truck playing the guitar for the birds and his pleasure—both I saw on the same day with not another soul in sight but my wife.

In these parts, there is always potential for high alcohol, power, extraction and prematurely aged, brown-tinted Grenache-based wines. But in Seguret, and especially with Jean’s first wines in the range, the story often shows a brighter cast. The freshness of the wines that helps them stand apart from most in the area are preserved by the Dentelles, but even more so from the cool winds that flow all through the night, guided by the Ouvèze River from Mont Ventoux, the great white limestone capped mountain of Provence. The Mistral wind also play its role with its cool air from the Alps and the infamously violent gusts that serve to reduce issues with pests and unwelcome fungi, like botrytis and mildew, but also limits yields for the vine causing grape shatter (coulure in French; a term for an imbalance within the grape cluster due to developmental damage through the season) while it terrorizes during the flowering and fruit set during the season. The wines are often garnet red interior and dark pink on the rim of the glass, which suggests less oxidation in the aging and earlier picking of the fruit.

Aside from its climatic complexity, Seguret is an epicenter for geological studies. It contains countless different rock formations from different geological ages that date as far back as almost two hundred million years with a notable influence from every important sedimentary rock epoch in-between. Largely composed of limestone in many forms from large rocks to small pebbles, with every soil grain from clay, silt and sand, the latter tends to be dominant and potentially imparts more aromatic lift and elegance, which is notable within Jean’s wines. Seguret’s vineyards begin low on the Ouvèze River terraces with soils derived from sandy river deposits and work their way up toward the steep Dentelles de Montmirail, a jagged uplift of vertically positioned rocks, largely composed of sedimentary rocks, most notably limestone, one of the world’s great rock types to support high-level wine—the same basic bedrock found in Spain’s Rioja and Ribero del Duero, Italy’s Piedmont and Tuscan wine areas and France’s Champagne wine region, Burgundy, Loire Valley, Jura, parts of Bordeaux and most of France’s south.