Endless curiosity and self-reflection are characteristics of the most compelling vignerons. Some are born into the métier, many of whom are children of the greats, and a select few reach for new heights never before attained in the family line. Then there are the industry’s most enlightened freethinkers who come from the outside, drawn in by revelation, romance, and occasionally, a healthy mid-life crisis. At forty-six, Hervé Grenier abandoned the life of a scientist and began anew when, in 2014, he had an epiphany that brought him to an old ramshackle cellar with beautiful, healthy, organically farmed vineyards in the quiet countryside of the Loire Valley appellation, Montlouis-sur-Loire.

He says, “During a visit with a winemaker I used to frequent, I suddenly thought, ‘I’d like to do that!’” Inspired by the excitement of a significant life change, Hervé left a career in academic meteorology research and underwriting, focused on agricultural climate risk in the States, to move back to France with his American wife, Emmy. They started their new adventure, only a couple of solid golf swings away from and to the south of the Loire River, on the first significant left-bank alluvial terrace that runs in parallel but 30-35m above the river. Over time they bought more parcels further south and closer to the river, Cher, as they reshaped and converted the land to organic farming. As of 2023, they maintain roughly 4.5 hectares, with 3.2 of them Chenin Blanc with an average of 60-70 years of age, a single hectare of Pinot Noir, and 30 ares (.75 acres) of Gamay.

Tasting with Hervé in his long, dark, damp, and cold underground concrete tunnel, lined with mold and wine-stained old French oak barrels, is thrilling. Impressive from the first sample, Hervé shares his perception of each wine’s strength and weakness observed through its journey from budbreak, to grape, to wine. Organoleptic vibrational overload builds with each thieved sip, sips that gush with vinous lifeblood along with the gifts extracted from its unique soils that have been bolstered by the microflora and microfauna and minerals mined from the rock and soil. His dry Chenin Blanc wines are vinous with the sweet green chlorophyll captured from the sun, the alchemy of slow fermentation—very slow, never forced—and the stamp of healthy lees from happy plants that render his wines digestible and revitalizing. The truth-seeking Hervé seems in deep reflection with each taste, contemplating the wine, his own nature, his choices. Vacillations between bursts of joyous laughter, doubt and self-reflection, are interrupted when he hits the mark. Inspired and utterly serious, he slowly chants, “Ça c’est bon. Ça c’est bon. Ça c’est bon.”

Montlouis has a different quality of soils from those of Vouvray, across the Loire River. Vouvray vine roots typically have closer contact with tuffeau limestone bedrock and more clay in the topsoil than most of vineyards in Montlouis-sur-Loire. Hervé believes that the wines on this side of the Loire River are typically less marked by minerality than Vouvray, he says, “So there’s room for other stuff!” The composition of Montlouis-sur-Loire soils from a general point of view (though each site is different) is a mix of perruches (fossils, lithified clay, flint/silex), sand, and clay, atop bedrock of tuffeau limestone with varying levels of topsoil depth. ‘Montlouis is sandier than Vouvray,’ is the usual summary in textbooks, but this depends on each parcel, because it’s much more complicated than that.

With the usual manifesto that espouses ‘terroir expression over all things,’ Hervé says, “I would not like that my wines mainly express terroir, even if it’s a beautiful terroir.” But what is interesting and even slightly contradictory to Hervé’s notion of Vouvray and Montlouis and the terroir influence is that his wines are wrought with a sense of place; perhaps not only in the perception of mineral nuance, texture, structure, and ripeness imposed by the site’s soils, exposure and grape, but his full commitment to the preservation of his full-of-life, organically farmed old vines, the quality of the soils, and, of course, his skill in capturing their essence. His whites are strongly mineral in impression, thickly textured and weighted on the palate and the nose; his Aubépin Chenin Blanc is like a magnum squashed into a half bottle. Early on in his newfound life as a vigneron he demonstrated (through his 2017 and 2018 Aubépin, the fourth and fifth vintages of his life) a precocious and keen understanding, maybe even a certain level of mastery, in his sculpting of wines with clean and fine reductive elements—no doubt an intended consequence of protecting and preserving his sulfite-free, naked wines until bottling. The body is fuller though the wines remain finely balanced between the earth and the sky. The deep clay underneath the sandy topsoils, the quality of farming and his personal calibration of fruit maturity is marked through his entire line of wines. Terroir aside, Hervé’s wines reflect his intuition, curiosity, and measured hand.

Hervé says he wants his wines to deliver, “The quality of the raw material produced from my vineyards; that they should feel good when you drink them. Satisfying. Pleasurable.” And he goes well beyond his aim. The Chenin Blanc are spectacular, singular, emotional, honest, and heavy on x-factor. For this taster, they stand tall among everything from the Loire Valley; sometimes they even tower over well-known and celebrated wines overwrought by cellar technique and experimentation. Hervé’s simple and confident approach is to let his wines find their own way, which they do. His objective for them to “be satisfying and pleasurable” is easily achieved, even for the everyday drinker. One doesn’t need to be an expert, or a wine lover with a penchant for the esoteric to fall for them, though a wine insider may be needed to help people find a bottle. They’re also profound, brainy, finely etched, and swoon-worthy for wine experts in search of a new frontrunner in the world of natural wine. Though they indeed fall into this genre, they are sterling examples of sulfite-free reds and whites, void of fault and without explanation or excuses. The whites don’t have any sulfur added at any point of the process, though if a wine is in peril he has no reservations when it comes to giving some assistance. This leaves his wines unclipped, robust and true in expression, free flowing yet harnessed and directed. 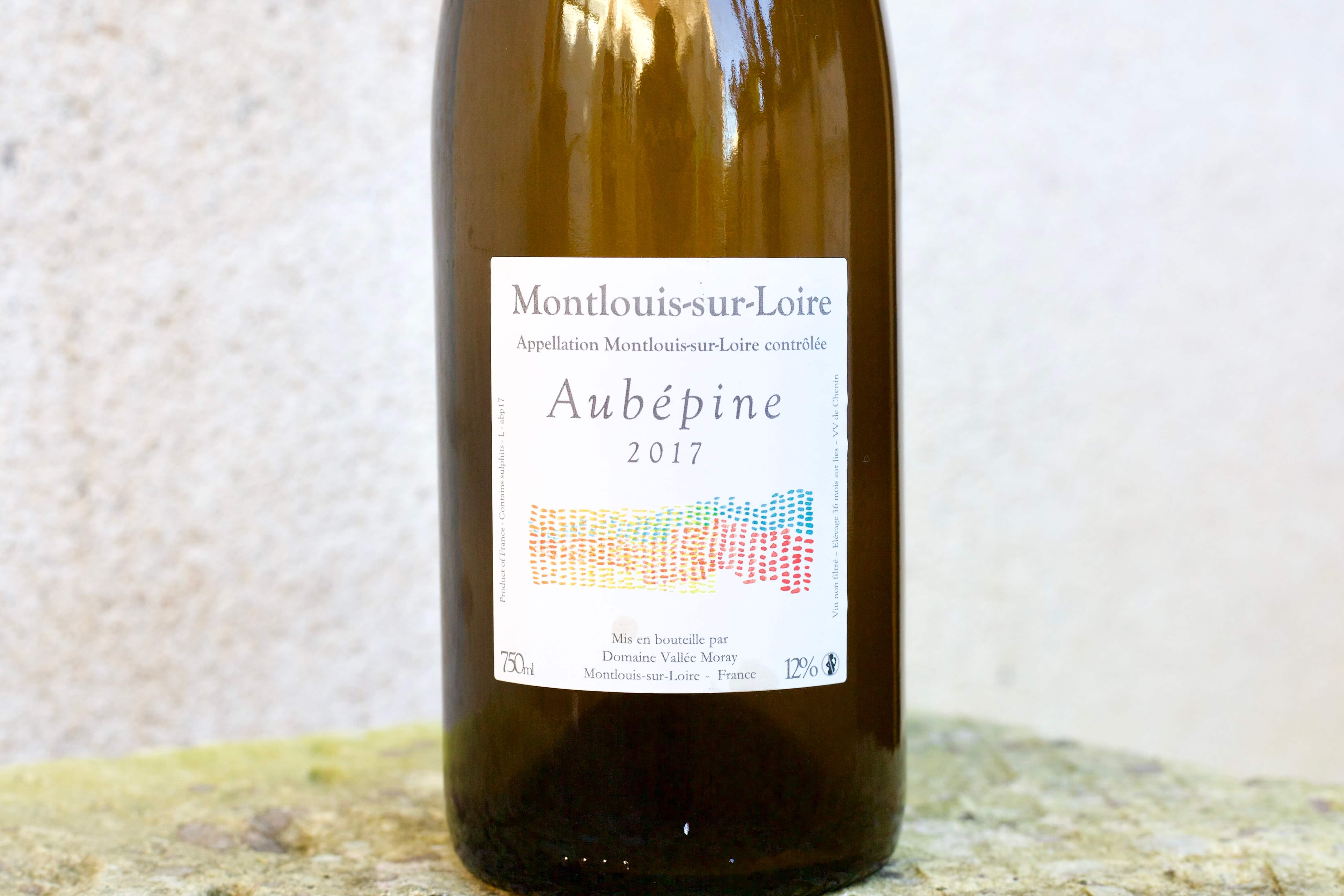 Hervé describes his approach in the cellar as “The simplest and most natural way to make wine. The only intervention is the topping up of the barrels until I prepare them for bottling.” Like the superficial tillage of his vineyards (light scraping in Herve’s case), his winemaking hand is gentle and patient. The fermentation of the classically styled whites, Cailloutis and Aubépine, takes place in old oak barrels with the total lees from the press—no débourbage (wherein the lees are settled before the wine is racked off them). There are no finings and filtrations, nor additions of sulfites—though, as already mentioned, necessary exceptions can be made. Fermentations can last months or more than a year before dry. The two Chenin Blanc wines are made in the same way, with Cailloutis a blend of many different parcels and Aubépine a specific site of old vines closer to the Cher than the Loire.

Hervé’s also makes an orange wine from Chenin Blanc (80%) and Sauvignon (20%), called, A Mi Chemin. This wine usually undergoes a two-month maceration on skins (fully destemmed) and is sparingly punched down, pressed, then aged in old oak barrels. Though the Chenin Blanc wines are glorious, Hervé claims with a smile, “A Mi Chemin is my wine.” It’s more gourmand than the other wines, with floating tea notes, dried citrus, stone fruit skin and dried flowers as opposed to fleshy fruit notes—which is to be expected with orange wines. It, like many other orange wines, is a wine for all occasions, with great versatility when it comes to chosen fare.

Hervé’s reds sing a bright and merry aromatic song. They’re fun, and they achieve Hervé’s objective of pleasure-led, feel-good, crunchy reds. Pinot Noir grown in Montlouis and made by the right grower are a fabulous surprise, as are the Gamay. He doesn’t commit the reds solely to single-varietal bottlings but likes to make blends, too. There is the Pinot-led blend with Gamay, Arcadienne, and the solo Pinot Noir bottling is Les Figurines—neither are imported yet as they are produced in very small quantities. Côt Libri is made entirely of Malbec from very old vines on extremely calcareous soils in Montlouis-sur-Loire. It was fully destemmed and after fermentation ages in 400l-800l old barrels. Expected for this variety, it leads with more purple fruits than red, and after quite a few years of cellar aging in bottle it shows a broad range of earthy, savory qualities.