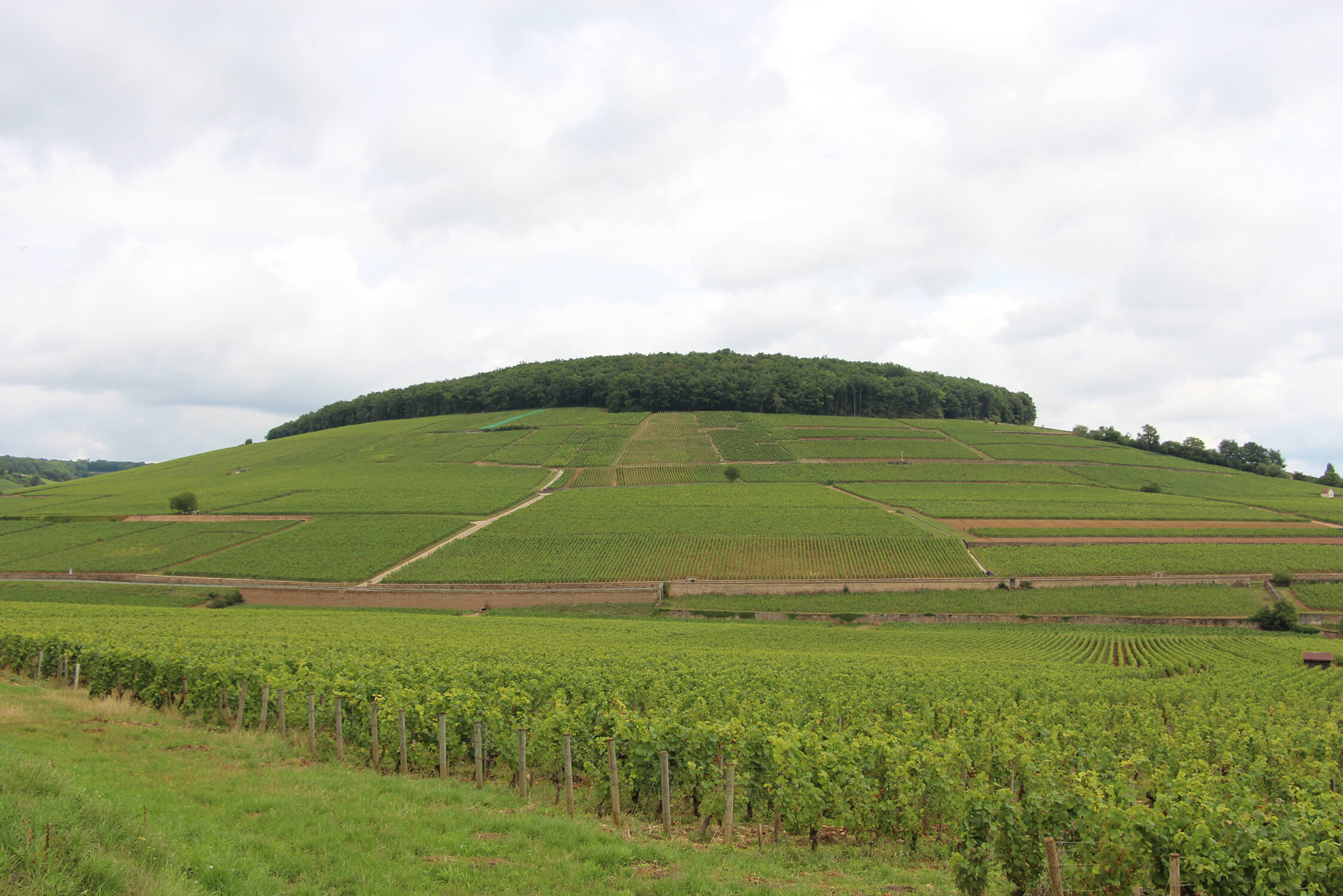 One of the most compelling qualities about David Croix is his directness. He answers all questions candidly, no candy-coating, no embellishment. His wines have similar qualities; they’re honest and straightforward. Respectful. There’s only beauty coming from the wines made from this estate. And joy—the joy of realizing possibilities.

David Croix, like many other Burgundians his age, is always on the move. In the early years, his wines were by his own description: “Darker and tighter in the past.” He says that now the vines have changed and so have the wines. The fruit now is bright and expressive, and the wines more fun to taste when young. When he and his team bought the vineyards in 2005, he changed the vineyard culture from standard chemical conventional farming to a high-quality sustainable practice; I’ve visited them a number of times and it’s clear he’s taking the high road with respect to nature due to the life and biodiversity of flora and fauna inside his parcels, despite not carrying organic certification. David explained that after the stop of chemical use cold turkey after 2005 the vigor and yield initially dropped and the vines suffered, maybe too much. He says that as a result of this, the wines appeared to lack elements in the energy spectrum and were a bit awkward for a while.

As you may have heard and clearly you can ascertain this from the opening comments, David is one of the most openly self-critical winegrowers I’ve met. We’ve been importing his wines since the 2011 vintage, and I liked them quite a lot even then—I didn’t mind the teeth in the earlier style and he did an exceptional job managing a string of challenging vintages impacted by hail. However, I’ve never been shy about appreciating tannins in Burgundy or other wines because if I did, I’d miss out on so many great wines. Imagine taking a pass because of tannin from the wines of Barolo, Barbaresco, Brunello di Montalcino, Chianti Classico, Taurasi, Aglianco del Vulture, as well as from a number of French styles, like that of the Rhône Valley and age-worthy Cabernet Franc from the Loire, and of course, Bordeaux. These regions have made a history around managing the right amount of tannin—even if it seems out of balance in the wine’s youth to us non-winemakers. Tannins are integral in supporting the slow bottle aging of wines, so they can attain more complex, intricate layers than what young wines can achieve. Unfortunately, today’s wine market preference for immediacy undermines the potential for many wines to improve their spectrum of complexity with time: to reach that dream world to where only old wine can bring us.

David’s new wines have definitely made a significant jump in accessibility without sacrificing the elements that will allow them to mature into something with many facets, and one notable factor that has given them some extra lift has been a change in his SO2 regimen. He now uses much less than he once did, made possible by switching from premixed laboratory SO2 solutions, to sulfur mined in Poland—much more active and natural than the prefab alternative. He describes the wines as being touched more softly with these additions, without the metallic and tight sensation usually expressed shortly after the older additions. Even just a few hours after some of the mined sulfur is added, he explained that the wines don’t express it in the same hard way. Today, the total sulfur levels are between 35 to 40ppm (or mg/l), which he says is half of what they were prior to the change.

He has also changed the timing of his sulfur usage, making a small addition at the crush of the first fruit that comes in, then using that batch to inoculate the incoming fruit, and not adding any more until some months after malolactic fermentation. I like this idea. It makes sense. It’s measured, while keeping the uncultured yeast fermentations healthy. Sometimes a wine’s first addition can be the following summer after the grapes were harvested. Also, less sulfur allows for tannins to naturally polymerize with less protection to oxygen—one of the particular elements sulfur is used to prevent; Sulfur dioxide by nature is anti-oxidant and anti-bacterial. It doesn’t correct oxidation, it curbs it.

He also quit working at Domaine Camille Giroud, and while he didn’t think this was much of a factor it’s hard to imagine it’s not. When one goes from making fifty different wines a year, down to a dozen, there’s a lot of room to sharpen precision; that is, of course, if he’s not spending all his extra time down in Saint-Tropez at the beach and Club 55. The reality is that when someone really observes throughout the entire growing season every step of the way, once the grapes go to the cellar they are already mostly understood before processing. This is not to say that David hasn’t done this in the past, but imagine how much better you could manage your workload if it were cut down by 50% and redistributed toward the details. Simply allocating more time for free thinking is undervalued, and if we’re always moving from one thing to the next it’s possible that we may miss on some groundbreaking thoughts.

The reality is that with such unpredictable weather patterns (and the temperature surely rising more quickly in continental climate areas) so many things will be touch and go, and will have to be approached based more on instinct than from experience. The extremes will become more extreme and the decisions made at the time of harvest after perhaps a wild season will likely not come from a recipe book. A notable difference in his approach (as of 2020) is that the 2018 will have higher whole cluster content than 2017 and will be aged in barrel for longer, as David says, “to get rid of some of that extra baby fat” from this ripe but somehow finely balanced vintage.

Most wine Francophiles are familiar with Burgundy. It’s divided into a few major areas, starting from Chablis in the north, the Côte d’Or, Côte Chalonnaise, Mâconnais and finally Beaujolais to the south, just above France’s second largest city, Lyon. The grapes are principally Pinot Noir and Chardonnay on Jurassic limestone bedrock (pretty much all the vineyard bedrock between Chablis to the Mâconnais is from this same general geological period), and Beaujolais’ red grape, Gamay, where the soils are largely derived from granite and metamorphic bedrock from the ancient formations in France’s Massif Central.

Regarding red Burgundy, the two appellations David’s Domaine des Croix is focused on seem to be thought of as second or third fiddle within their classification. Beaune’s 1er crus are often placed in the middle to lower end of the totem—surely from all the Côte de Nuits’ main appellations. And perhaps it’s qualitatively (not only literally) scrunched in the middle of those from the Côte de Beaune, under Volnay, Pommard and even slightly lower on the hierarchy than Savigny-les Beaune, which I attribute mostly to the quality of domaines that achieve in the latter, like Bize, Pavelot and other big names from outside the appellation who have been drawn to it, like Lalou Bize Leroy, Bruno Clair and Mongeard Mugneret.

Corton, the quiet brute in the family of red grand crus, is experiencing a makeover and resurgence of interest. It seems to be the best value—if you can say such a thing—red grand cru appellation at the moment in the Côte d’Or, if not matched in price by the lesser grand crus like Echezeaux and Clos Vougeots (at least from many producers), for example. Perhaps the new property taken by Domaine de la Romanée-Conti has piqued interest in Corton along with the increased scarcity and absurdly elevated prices of other red grand crus made by a load of fabulous, small production, big-name producers. Corton’s Pinot Noir vineyards seem to be the last of the great hills to be tamed in the modern era, and while its natural attributes may always be more brute than beauty compared to most other Grand Crus, there are those, like David, who are illuminating its finer points.

There’s so much written about Burgundy, with special attention to the Côte d’Or, that it seems redundant to have yet another lengthy explanation of the big picture, and futile to get caught up in all the specifics for every given wine. It’s from the regions that are not excessively or even barely written about where I will make the effort to bring forth details that are difficult to find, at least on the internet.

For more extensive and general information on Burgundy, I suggest exploring the many thorough accounts by authors like Jasper Morris, Remington Norman and Clive Coates. Plus, there’s an immense amount of coverage from critics who uproot tons of new and interesting details with each new publication, with some notables being Burghound, A View from the Cellar, Winehog and Vinous. Also, one shouldn’t miss out on Becky Wasserman’s website www.beckywasserman.com for a lot of great content, and the website www.bourgogne-wines.com, where a good collection of videos and free downloadable vineyard maps are available, along with general overview content for each area.

Within each of Domaine des Croix’s product pages on our website are details of each of terroir (or climat) and with some details on the winemaking. You’ll find information on some of the product pages that discusses some of the particularities sort of skipped over in the aforementioned Burgundy bibles. I’ve written a bit extensively on some terroirs and less on others. -TV