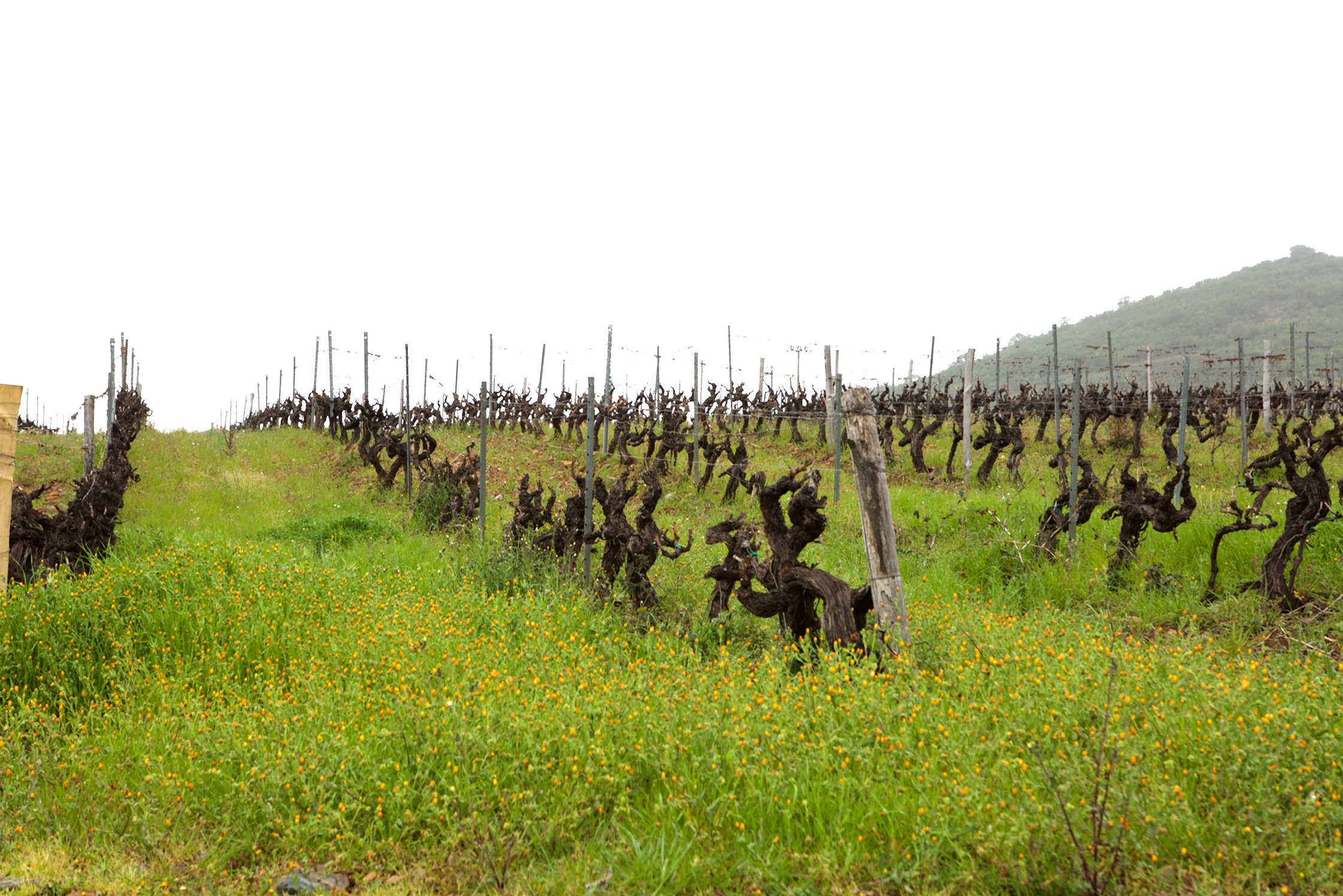 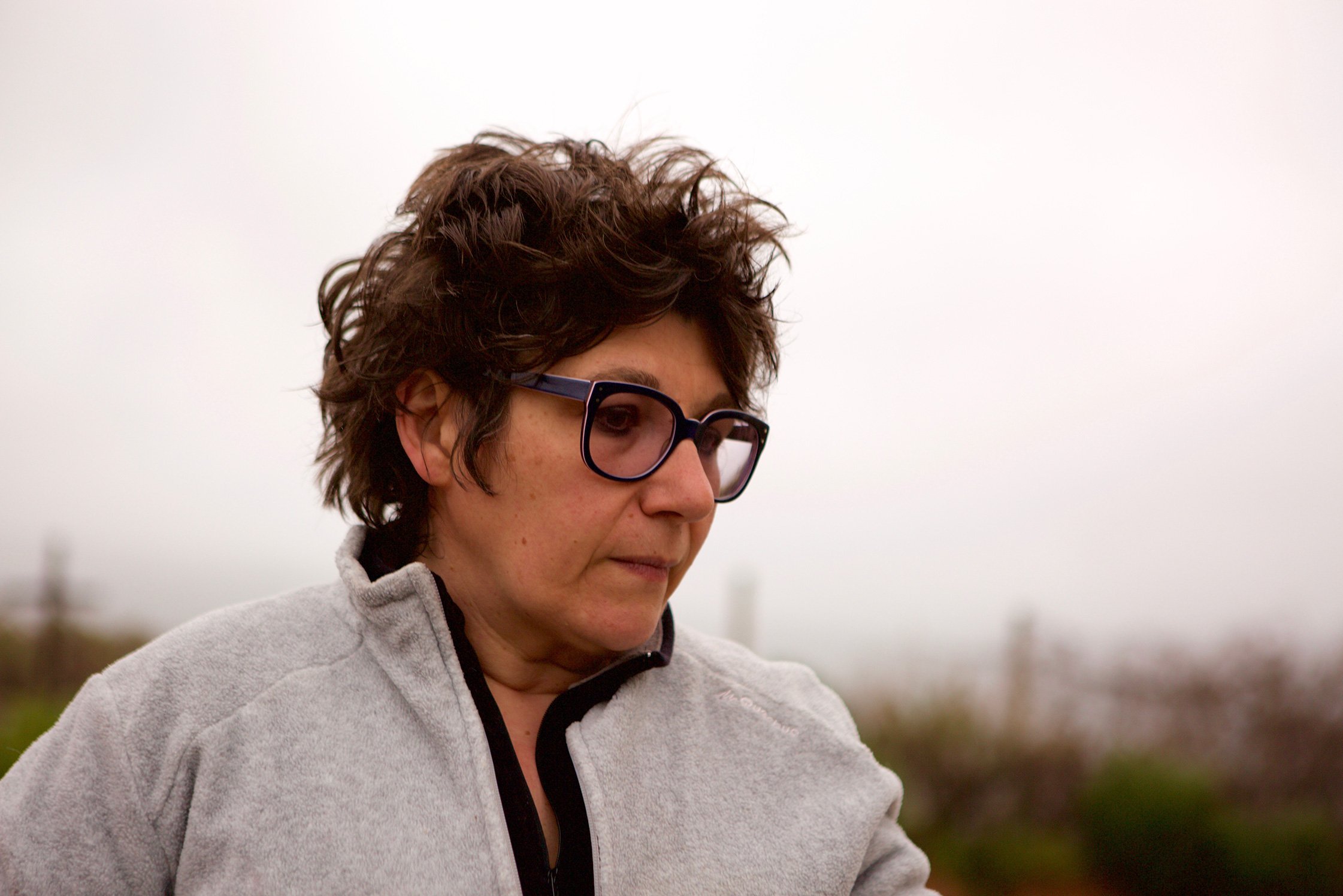 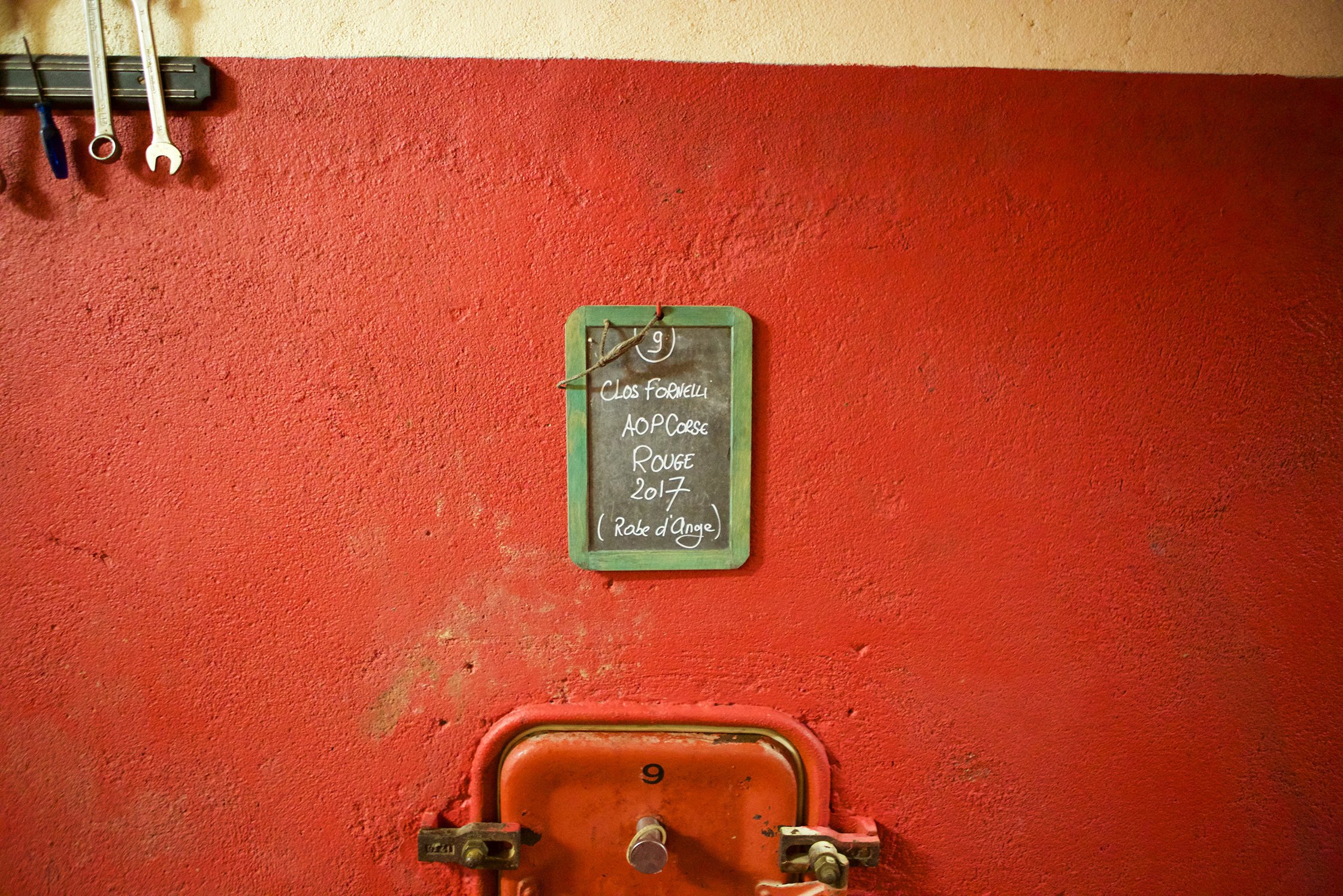 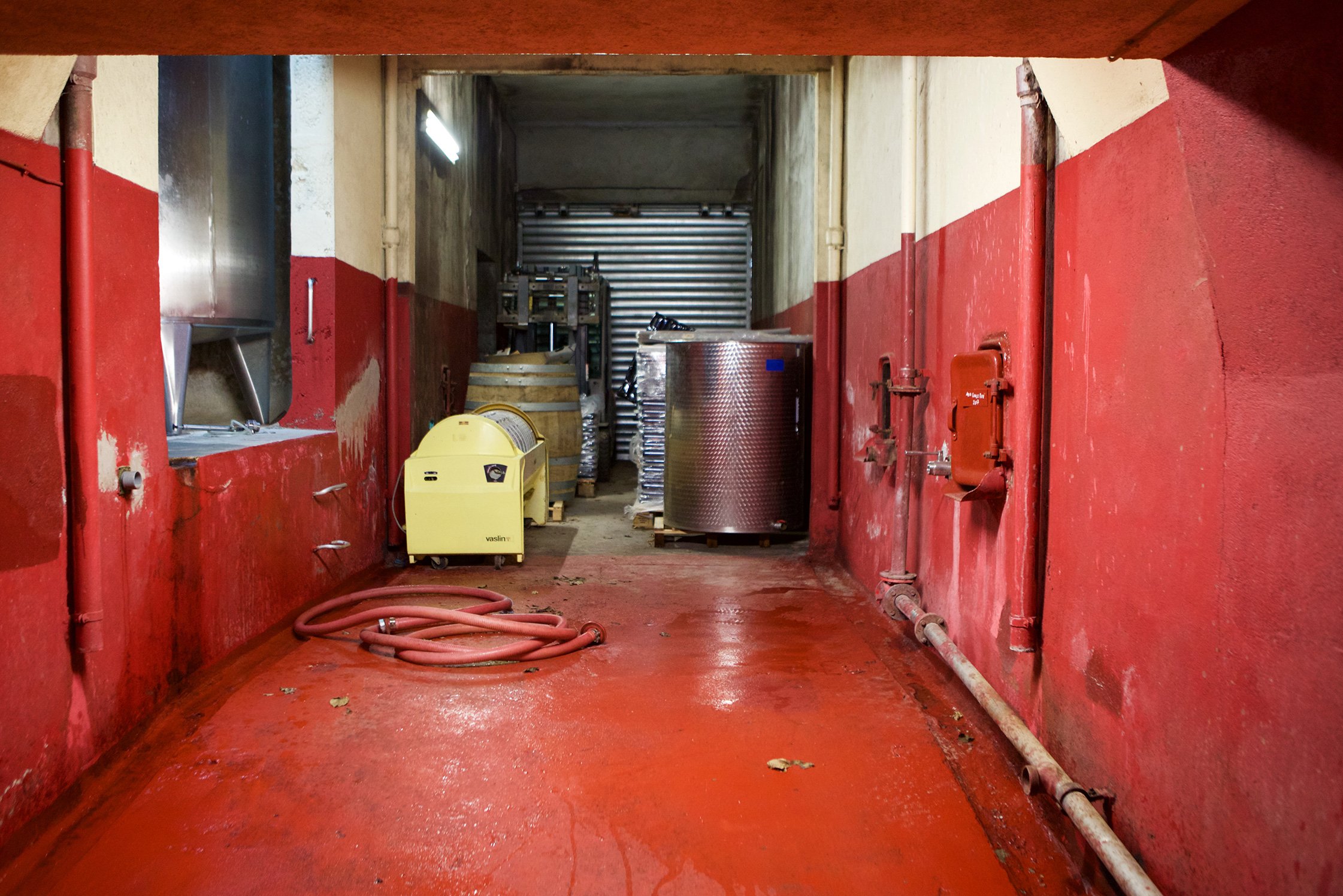 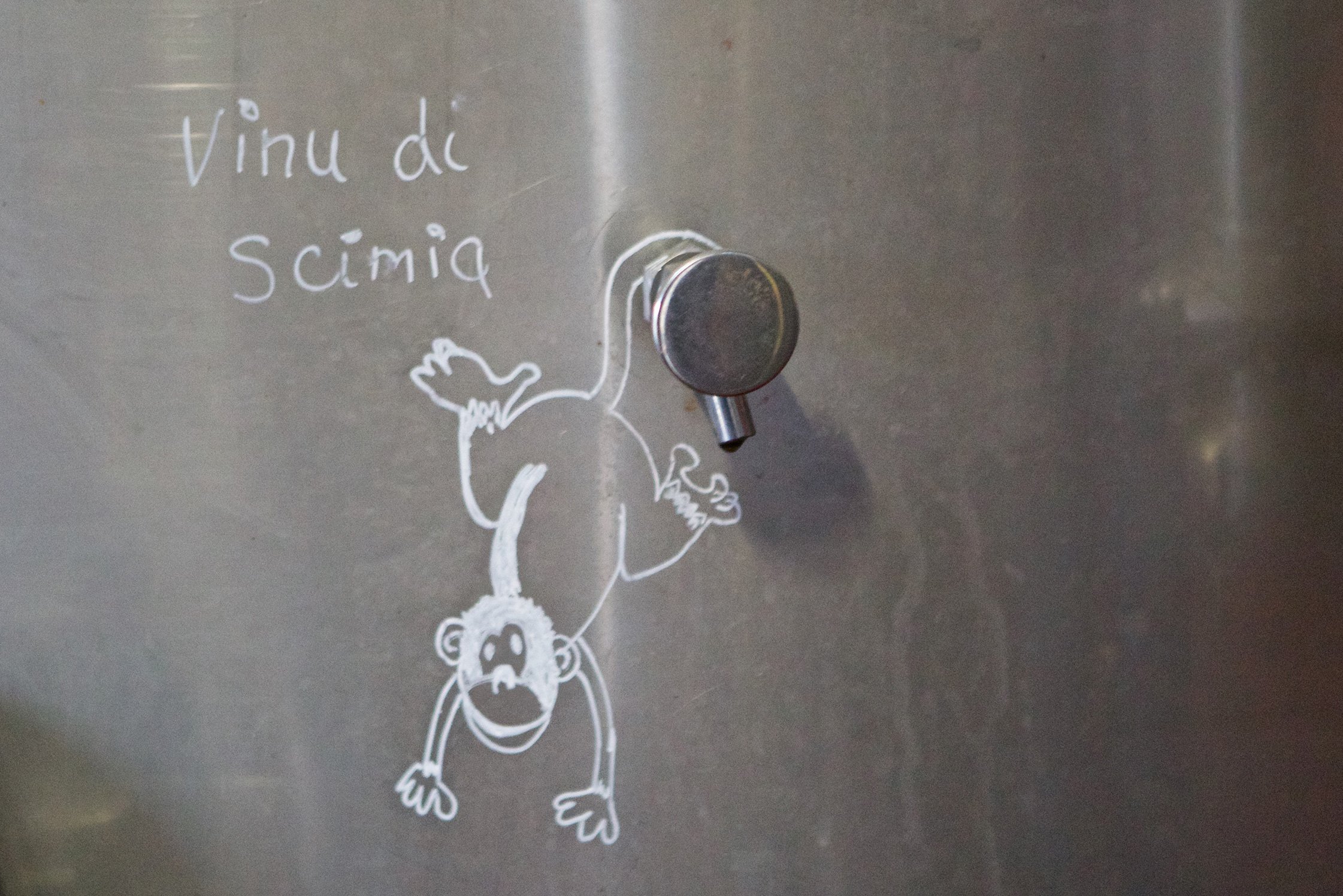 Josée Vanucci seems every bit Italian as she is French, and her English carries a British accent—what a mix! From the first moment her enologist Emmanuel (Manu) Gagnepain and I met up with her, she abounded with a tireless energy and impressive agility as she moved about her rustic and densely packed cellar, where we had an open and unguarded discourse about her wines and how they are crafted.

Risking misinterpretation with someone I didn’t know, I candidly admitted during my first visit with her that while her wines were sophisticated, they also led with an immense amount of pleasure, and that I would be happy to just sit down and drink them by the pitcher because they were so delicious. Lucky for me, she was pleased by the comment and exclaimed that that is exactly the kind of wine she wants to make. Just like her, they are full of life, unpretentious and bring good vibes. (They are serious though, but who cares, when wines like hers represent the charming spirit of the island and are impossible to stop drinking.)

From the outside, the winery looks like a small white rectangular Cessna-sized airplane hanger with green rollup garage doors and CLOS FORNELLI written in big block red letters. On the inside, it’s a jungle gym of numerous floors and mid-level rooms, trap doors, hidden tanks, slanted concrete slabs with open drain gutters routed on the sides, and walls slathered with waterproof dark orange and white epoxy. There are only a few large oak barrels in the cellar and the rest is jam-packed with stainless steel and old concrete tanks; these are the kinds of aging vessels I prefer to see in the Mediterranean, especially that there wasn’t a new oak barrel in sight.

Josée and her husband, Fabrice Couloumère, employ certified organic farming in their vineyards and have many grape varieties that are not commonly found elsewhere—like the white grapes Biancu Gentile and Genevose, and the red Minustellu—along with the more well-known (at least for those familiar with Corsican wine) Vermentinu, Sciaccarellu, and Nielluciu. These conscious farmers use nature as their guide for achieving their wine’s high quality and superb value, and have folded in vineyard techniques like enroulement. This technique involves no tipping/topping/clipping of the vine shoots; the parts of the shoot that extend above the last trellis wire are simply rolledsideways around the top horizontal wire. An oversimplification of the theory behind this practice is that it allows the vine to follow a natural transition that redirects its energies from the vegetative cycle to the fruit cycle. Prematurely removing the tip confuses the vine—literally cutting off its head—and it continues to allocate energy toward vegetation instead of the natural moment to focus on the fruit. You can imagine this is an evolutionary response to an insect or animal chewing the tip off the shoot and the vine’s compensation by growing more vegetation to complete photosynthesis, which is needed for sugar production, etcetera. They also minimize the shoots to one per vine and make a green harvest before verasion to lower the yields and focus the vine’s energy on those last clusters—the ones that make it into our glasses.

Their winemaking practice is straightforward and lends itself to a style that speaks of the place with a clear voice of each grape’s primary characteristics, with little intervention. The fermentations are all natural and the wines are bottled after a short time in vat with sulfites kept to a minimum; it’s easy to feel this deft touch through these wines bursting with pleasure; even her Sciacarello, a thin framed, fresh and aromatic red (often over-sculpted in other cellars) is a darling here with no uncertainty in its naturally sensual aromas.

Clos Fornelli is located on the eastern side of Corsica, on Tyrrhenian Sea, and not too far from mainland Italy. This setting is above the Alérian Plains, a somewhat flat and rolling set of hills named after the small coastal town of Aléria, an important Roman naval base for centuries now home to only a couple thousand inhabitants. Vineyard land on the Alérian Plain falls into AOP Corse, a broad reaching appellation without distinction.

Vanucci’s vineyards are up above the plains on the terraces of the Bravone River. The nights on this side of the island are typically cooler than the more famous wine regions on the west side, so you can imagine the shape of the wines (an abstraction we wine geeks enjoy) is different. This is a result of the sharp rise of the mountains from the sea, which effectively cuts the sun off early and lets the cold in to help etch aromatics and texture while raising the frequency on the fruit and mineral nuances. All that said, it’s still Corsica, a wonderfully sunny island (sunnier than mainland France) and this terroir/grape combination gives lift to the high-spirited wines that Josée dreams up and captures in the bottle.

Josée’s family has forty hectares of vineyards and only bottle wine from twenty-five, while the rest of the grapes are sold. The vines are in the Bravone Valley, a river valley that originates from the Castagniccia Massif. The soils are deep with decomposed schist clay soils tinted red by plentiful iron content and covered with river gravels brought by the Bravone River. This soil, with its variation of large and small grain rocks mixed into the clay brings exceptional drainage to her vineyards (not always a huge concern given the low levels of precipitation on the island compared to the rest of mainland France), which is especially encouraging for the development of Sciacarellu, a red grape that has become Josée’s muse (as well as mine!) from the array of grapes on the island.

To dig a little deeper into the foundation (the bedrock and topsoil) of the wines, Corsica is divided into two main geological units (yes, getting a little technical here, thanks to the years of tutoring from and traveling with my talented geologist friend, Brenna Quigley): Crystalline Corsica and Alpine Corsica. The former is named after the quartz crystals in the granite soil that makes up about two-thirds of the island—basically the heart of the island and the entire southern end and most of the western seaboard. Often where you find granite you find metamorphic soils nearby (as demonstrated within the Galician Massif, Massif Armorican, Massif Central and the two main mountain regions of Western Europe: the Alps and Pyrenees) because of collateral heat and/or pressure that has augmented (metamorphosed) the rocks. This is also the case with the smaller geological unit of the two on the island referred to as Alpine Corsica.

Alpine Corsica is composed of deformed rocks that were created by the collision of sedimentary rocks formed between 60-250 million years ago with Crystalline Corsica during the alpine orogeny (mountain building), which began about 60 million years ago and is still active today. The result is a great volume of different metamorphic rock formations (like schist, gneiss, gabbro and more—basically the geological rock star roster of France’s Muscadet wine region) as well as bits of volcanic basalt and other igneous rocks. Suffice it to say, Clos Fornelli’s vineyards are complex soils largely derived from that list of impactful and unique decomposed metamorphic rocks.

Click here to read a short but more thorough overview on Corsican geology.

So why is the particular rock type interesting to note, especially when it’s decomposed down into something else like it is in Clos Fornelli’s vineyards? It’s simply because of what mineral makeup and trace elements were contained within that are now more easily accessible to the vine when compared to the vine (with the help of mycorrhizal fungi) mining nutrients from a larger hard rock surface areas. It’s the makeup and quantity of the foundation (dirt, rocks and microbial life within) that bring to life the differences when considering that a wine begins to build on. In a vin de terroir, the unique proportion of this, that and the other is what gives a soil its own unique contribution to the more nuanced qualities a wine may develop—yet all of this is theoretical, of course.

There’s so much debate on this subject, but if one were to take four esters used for a perfume, or four ingredients for sauce that make them balanced and desirable, they need to be in specific proportions. Soil composition—speaking of its nutrient, mineral, grain sizes and water retentive traits—is not far from this idea. It may not be the meat and potatoes of the final dish, but perhaps the amount of salt, or type of pepper, herbs and spices in micro-quantities that complete the full range of taste for the dish. What we know about soil and its contribution to a wine’s ultimate expression is not very well understood, but it should not be dismissed for lack of evidence. Take for example hydroponic butter lettuce compared to one grown in dirt; tell me they don’t taste different and I will tell you that I understand why you may not share this perspective about soil and its contribution to wine beyond its water retentive qualities. -TV