The Meat of Mâcon, Part Seven of An Outsider at The Source 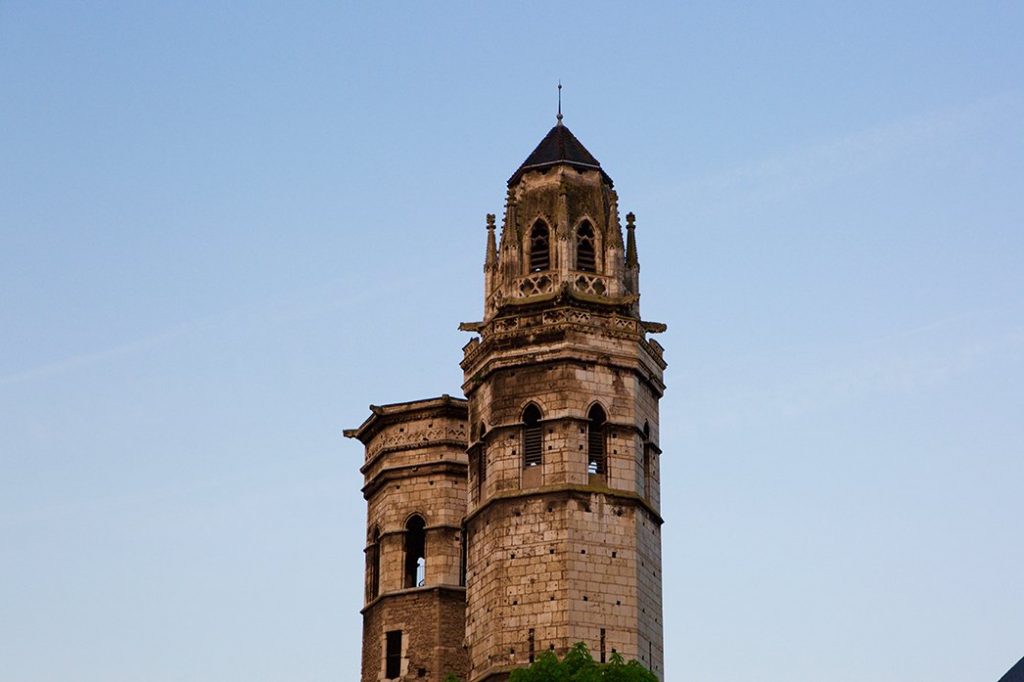 We headed south toward Mâcon, where we would sleep for the night before continuing on the next day to the Savoie department, up in the French Alps. It was a straight shot and about an hour to our destination, through mostly flat and featureless fields. A high point came when we reached a tollbooth and Ted achieved a small and comical victory when he said, “How much do you think this is? Eight bucks?” (as if bucks were now Euros); he was dead right, and quite pleased about it. It was a game that he would continue for the rest of our travels and he was almost always on the nose.

Andrea’s keyboard keys clicked quickly as she filled orders, answered questions and put out fires with input from Ted, and by dusk we rolled into Mâcon, a little city on the Saône River, just north of the hills of Beaujolais. We zigzagged our way through narrow streets between simple, mostly gray, prewar four story walk-ups. We found our Airbnb in just one of these, across the street from a huge, ancient limestone edifice with two towering spires, like some citadel straight out of Lord of The Rings.

The front door of our building had a big tarnished brass knob in the center that clicked loudly once the tricky lock was cajoled by the oversized key. Two turns up the switchback staircase brought us to another door with a center knob and a rope-pull doorbell. Inside, we found another space that, like in Puligny-Montrachet, was incongruously decorated with modern flourishes straight from the pages of Dwell magazine (some of which could be found on a rack in the bathroom). After a quick refresh in said water closet and the obligatory sign-in to the new wifi to feel a brief connection to the real world back home, we set off for dinner.

Ma Table en Ville was a hot little restaurant a block away, with killer reviews on the web and a good wine list. But when we got there, we found a room with ten tables at most, all occupied. Three huge multi-colored fiberglass globe lights hung in a cluster over sleek wood tables and Hans Wegner Wishbone chairs (yet more modern). The Maître d’ summarily told us that they were full for the night; it was Château-Chalon all over again. It’s not that we weren’t prepared; it was just that most of these little places don’t take reservations, so if you don’t get in early you’re just out of luck.

Only slightly perturbed, we set off through more narrow alleys between low stone buildings, paved down the center with polished limestone tiles—a promenade open to cars where rivers of people move out of the way as drivers plowed through. The walls of these small canyons were lined with slick modern cafes and clothing stores full of well-dressed mannequins, prices in big stickers on the windows. We could have been in one of the urbane little corridors of the Marais, in Paris.

Our destination was another restaurant recommended by the Internet, located in a building covered with green webbing over repair scaffolding, which might have explained why the place was completely deserted on a Thursday. (As with lunch that day, I’m going to withhold the name). We took our seats at a cold steel table under severe floodlights beside half of the space that was closed off and dark. I was a little disappointed that the menu was all beef, except for a few side dishes and appetizers. I’m not a big meat eater, but I was willing to make a go of it, while Andrea put together a bunch of a la carte sides to keep it light and vegetarian.

The serveuse (whom I’ll call Maude) was a beleaguered matron in an oxford and slacks. She seemed wary of us and more than a little impatient with my choppy French. Relief immediately washed over her features once Ted stepped in and took over communication. He ordered a bottle of 2013 Chiroubles Beaujolais, produced by Christine and Gilles Paris. It’s one of the few wines that use no SO2, no filtration and no fining, and maintains a cleanliness that many “natural” wine producers seem to leave in the vineyard before the grapes even ferment. The wine was delicious and understandably one of his favorites.

Throughout the meal, Maude seemed to resent us for being the only table in the big space (sure, I could have been imagining this and she was just cranky); not a single other party came in while we were there. But the result was some surprisingly prompt service, especially for France and considering Maude’s age and physical condition; she brought and cleared all the dishes with hands severely bent and knobbed by arthritis that pulled on my heart. But she also had a quick command of the menu and accommodated some changes we requested with a proprietary air.

I had a rich sampling of mini-appetizers including a lobster bisque, a tiny waffle with chorizo on it and a tomato tart, followed by a large flavorful marinated flank steak, and then some homemade vanilla ice cream for dessert. It was overall quite adequate. To be honest, I thought both meals that day were misses, after four possibly better places had shut us down. The food in France is mostly amazing, but you can’t win them all and I had just arrived—it would soon get much better.

Though I heard murmurings from the kitchen, she was the only member of staff we saw the entire time, which fed a story I continued to tell myself that she was the owner, a thought that gave me comfort yet elicited even more pity. It was only as we were leaving that she finally exhibited an effusive gratitude that reinforced my suppositions. At least we had showed up that night.

A walk east through the sleepy town brought us to the Saône river with its cobblestone quays on a tier below street level. Thin white clouds crisscrossed the moon over the smooth water like knife slashes on a dark painting. Ted and Andrea spoke low a few feet away, like the newlyweds they were.

We got back to our street, went over to the towering citadel and read the placard. It informed us that we were staying across from the Old Cathedral of Saint-Vincent de Mâcon. Built in the eleventh century to replace an original structure from the sixth century, it shows the wear and tear of countless religious and revolutionary wars. The two octagonal Romanesque towers were extended to nearly twice their original height in a gothic style in the 14th century and still showed an outline of external staircases that spiraled upward. I thought of stoic monks with bowed and tonsured pates and hands tucked into the opposing sleeves of their brown robes, slowly tromping up the steps without a second glance down from the dizzying heights, as soldiers slaughtered each other at the gates.

A huge arched entry in the front was sealed with a wall of glass like that of some modern museum. Around back, scratched up Plexiglas windows closed off the dark, crumbling, cavernous chambers inside, where the shadows seemed to shift. Apparently there was some sort of restoration underway, so the current state was one of shabby modernity shielding haunted places.

The pillow back at the Airbnb fit my face perfectly and quickly pulled me on to morning, as again, jet lag-induced snoring choked my breathing into a grind all night long.