Of Corse, Part 5 of 9: Ajaccio, Electricity and the Concrete Egg 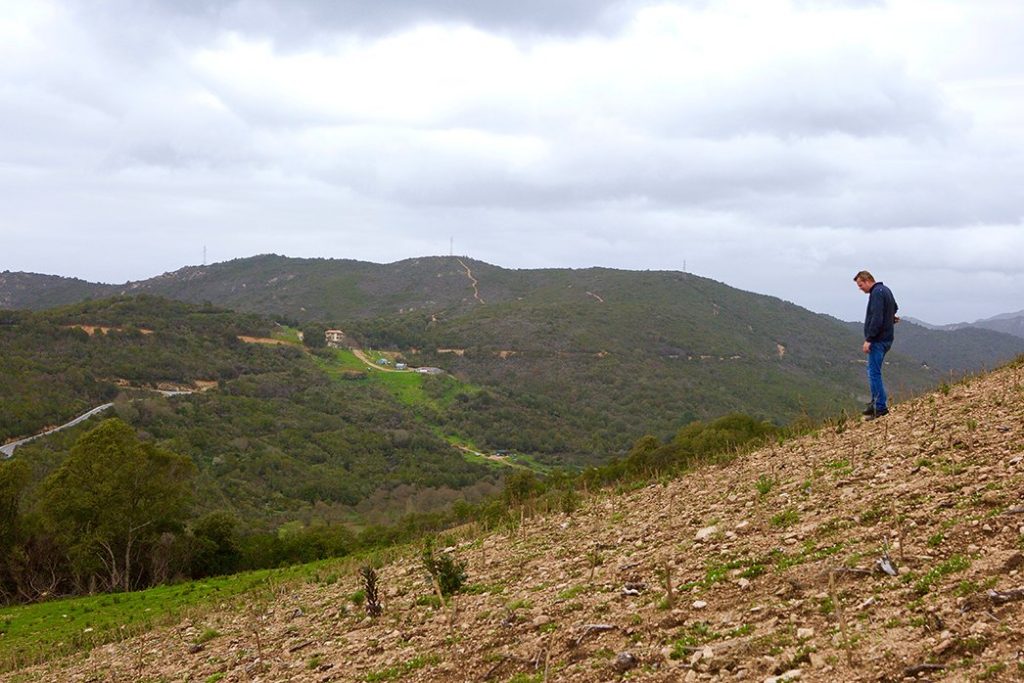 We stopped on our way from Propriano to Ajaccio to visit the land that Manu and Jean-Charles intend to plant with vines next year. It sits up at around 550-600 meters, making it the highest site on the island. The soil is primarily granite and the slope is treacherous. It’s surrounded by forest on three sides and on the fourth, just below the frost line, is a cow pasture for Jean-Charles’ brother, Jacques. I met him in the morning on our way out of the Abbatucci domaine and he was an exceptionally nice guy, just like his brother.

We made a stop at an old wooden shack of a restaurant up the hill just beyond the vineyard. The lack of restraint with the wines at lunch at Domaine Vaccelli started to wear me down and I needed a coffee. About halfway to Ajaccio through the winding country roads, what I thought was an innocent espresso started to feel like I drank Liquid Plumber. I’m extremely sensitive to caffeine and only use it to counter a lunch with wine, and though my insides were squirming, I had too much to talk about with Manu to wallow.

I asked Manu about the concrete eggs I saw in so many of the wineries he works with and he said they’re special vats used for aging and fermenting wine. They vary in size and are propped up with the narrow end at the top. I’ve seen them a lot on my travels and heard a lot of ideas about them. Nomblot, a concrete egg manufacturer, explains it succinctly on their website: “The vertical ovoid tank takes advantage of the micro-oxygenation that is made possible by the clay-cement material. In this giant egg the lees are continuously forced upward by an internal current resembling a vortex.” Micro-oxygenation and suspended lees tends to make wines with a softer mouthfeel.

Manu recounted a story with Jean-Charles when they bought their first egg and the resulting wine that was, as Manu put it, like “Sciacerello soup.” Jean-Charles’ eyes just about popped out of his head when they had their first tasting because it was the opposite of what they were trying to achieve.

Manu’s idea of wine is based around freshness and verticality. Generally, when people talk about vertical or horizontal wines (which happens all the time) it’s a reference to what can be described as the shape of the sensory experience. Vertical wines have a more lean body—skin and bone—with more lines and angles. Horizontal wines are wider, have a more squat frame and more meat on the bones, without much angularity.

Decisions in the vineyard and cellar indeed shape a wine, but the largest influence of this matrix starts with the soil. A simple rule of thumb (though not always the case), is that the more stony the soil, the more vertical the wine, while the less stony and rich the soil, the more horizontal the wine.

Choices made by the vigneron will work with these attributes, or against them. A vin de terroir, the kind of wine that gets me fired up, is created when the vigneron recognizes the specific attributes of the land—in no small part the soil—and works to encourage the expression of them. I’m not sure what one would call the opposite of this. Maybe just wine.

With some experimentation, Manu discovered that when the concrete egg was positioned close to any metals (steel tanks and walls) the electrical exchange kept the lees suspended for a longer time, which is what many want from this vessel. This was because metal is highly conductive and contains an electrical charge while concrete does not. The suspended lees make a wine with more richness, and with the use of the egg it will also bring elegance. When he moved Abbatucci’s egg to a different room without metal in it, the wine fell clear in a matter of a couple of weeks and began to become more vertical—the result he was looking for.

At another winery, he moved a cloudy wine in the egg away from metal, but there was no change in the turbidity (clarity) of the wine. He asked if there were water currents anywhere near the egg, behind the wall or underground. As it turned out, there was a water pipe in use below the floor under the egg. Again, he moved the egg to another place away from metal and any kind of energy flow and the wine quickly fell clear. The mechanism of how energy could have this effect on wine is a trippy subject that I find fascinating, but I don’t know much about it.

The day before at Abbatucci’s cellar we tasted the same Vermintinu out of the egg and compared it to one out of a stainless steel tank. The result supported Manu’s theory. The wine from the egg was sharply focused and vibrated like a gently plucked harp string. The same wine out of stainless steel, while fabulous and as good as any other white on the island, was slightly more crude and disjointed by comparison. That wine out of the egg was the most memorable white wine I tasted in Corsica on this trip.

We got back on the road and my mind was spinning from our conversation, and my stomach still churning from the espresso—maybe I needed to get away from the metal of the truck to calm my insides!

To my surprise there was a lot of traffic in Ajaccio, the capital of Corsica and a medium size town of 70,000 people. Slow traffic isn’t always bad when you’re in the passenger’s seat and exhausted. I rolled down the window, took off my boots and put one foot on the dash and the other out the window, appreciating how beautiful the area was. My mind drifted into thoughts about Napoleon and this scenic town he grew up in. He saw the same natural beauty but went off to mainland France to conquer the world. It didn’t seem to make sense, except that Corsica was a crossroads for conquest and maybe he just wanted to be the protector of his island while he was alive. Who knows.

Manu took me to the center of town to meet Nicolas Stromboni, a Corsican who wrote a fantastic book called Corsica: The Recipes, which even has a recipe on how to make a knife, something I found unusual but cool. He also owns a fantastic store in Ajaccio, Le Chemin des Vignobles, that sells a well curated selection of wines and local products with a super cool wine bar and restaurant upstairs. 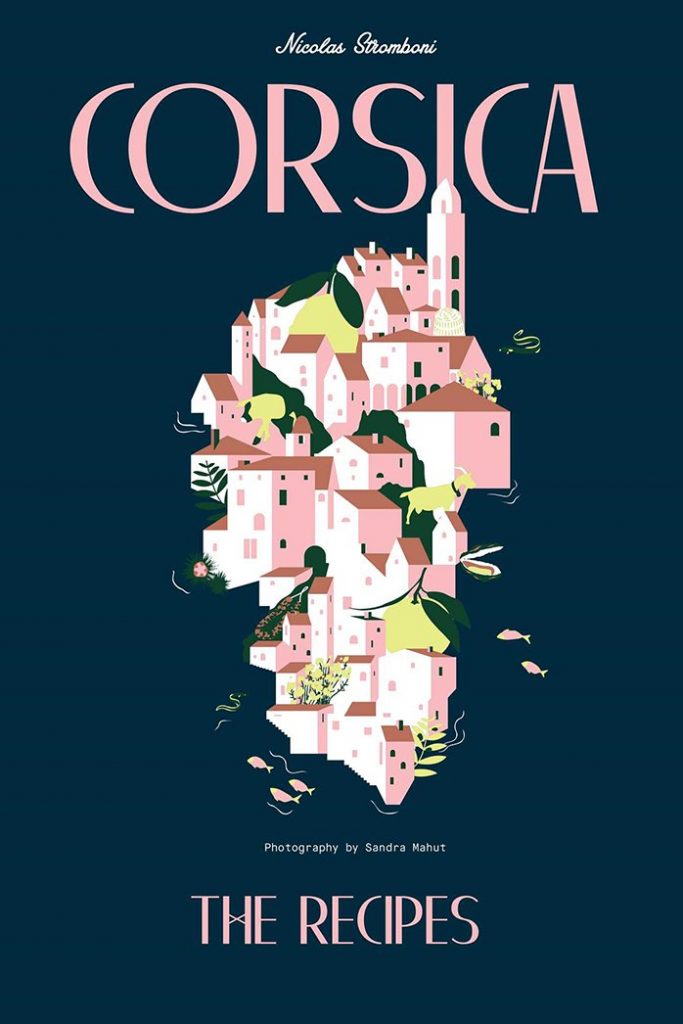 The restaurant is dimly lit with the ambiance of a speakeasy crossed with a coffee shop in Saint-Rémy-de-Provence. Part of the restaurant is inside old concrete fermentation vats that have been cut open on two sides with elegantly shabby chic settings, tables and chairs. Unfortunately, Nicolas wasn’t there and it was a pity that we couldn’t stay for dinner either because we had tentative plans with Jean-Charles back in Propriano.

Nicolas’ restaurant is worth mentioning even though I didn’t experience it firsthand. Manu said that when visiting Corsica, it’s considered a must, and I could see why. The ambiance will transport you out of the world and into a fantasy created by one of the greatest food and wine minds in Corsica.

Next Week: Of Corse Part 6 of 9: A Big Bear and the Long Game