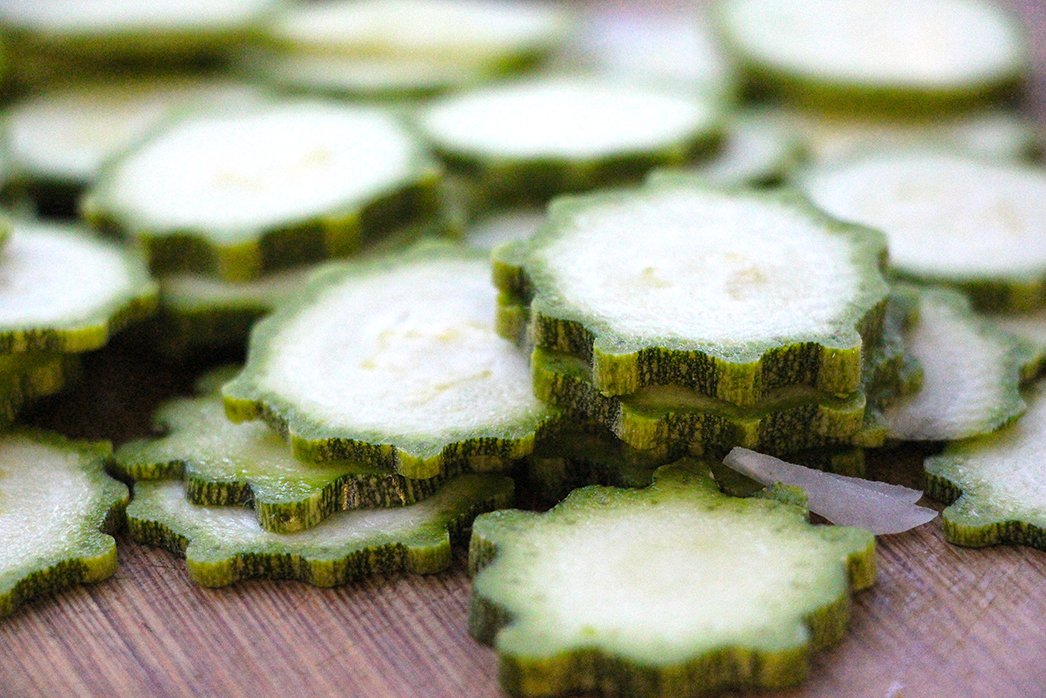 The two prevailing names for zucchini suggest a split personality. The Italian name, which we obviously employ in the U.S. too, Zucchini, is a sort of silly word that sounds a bit like a clown who performs at kids’ birthday parties. (Oh, yes, there it is: http://www.zucchinibrothers.com/ ) On the other hand, the name favored by the French and English, Courgette, sounds gallant, like a courageous corvette or cougar with jets.

Given this pointed discrepancy, I see two prevailing attitudes toward this summer squash: those who esteem and admire it (the courgettes) and those who are uninspired and go out of their way to avoid it (the zooks). Well, I’ve been a fairly vocal member of the latter group for most of my life. Outside of ratatouille and a dish I was once saw a recipe for but failed in my attempt to produce it (sun-dried zucchini), I just don’t see the point. At best its flavor is extremely mild, poised somewhere between faintly bitter and sweet. At worst, it’s insipid, with no flavor at all and a slimy, mushy texture. So what gives? 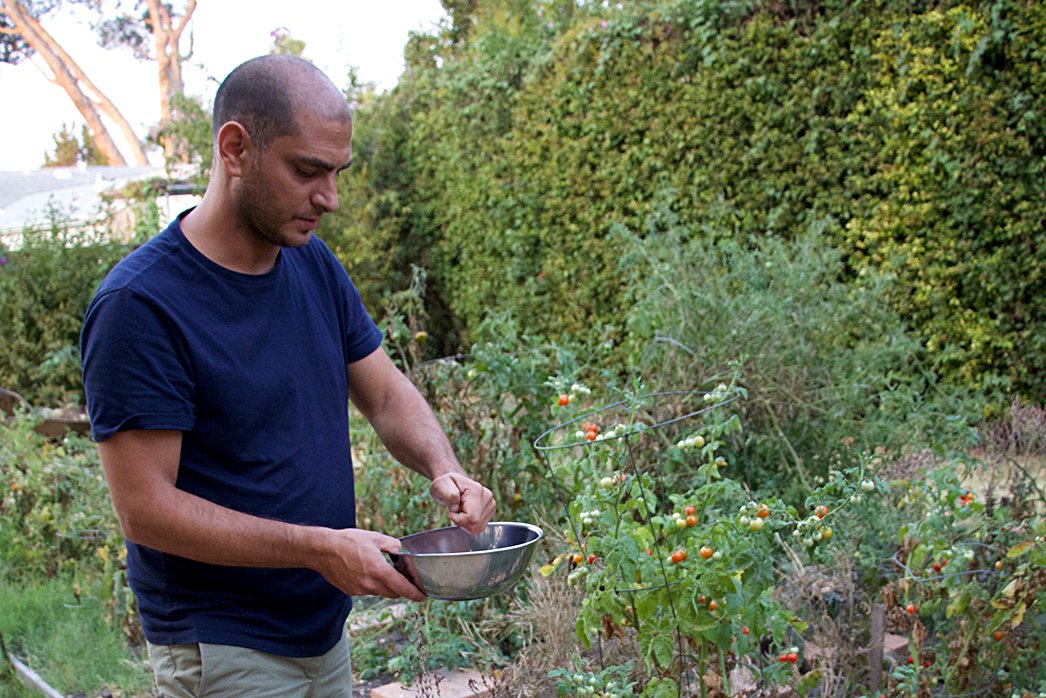 So the other night I learned a much more compelling approach from an Italian chef, who was inspired to become a chef in part because of this dish. Zucchini, stand up and be proud. The zucchini hero was Antonio Giordano. During his eight years as chef of Terroni in Los Angeles, he earned raves for his perfect pizzas and meticulously handmade pastas. He recently quit to prepare to open his own restaurant, which will also be in Los Angeles. 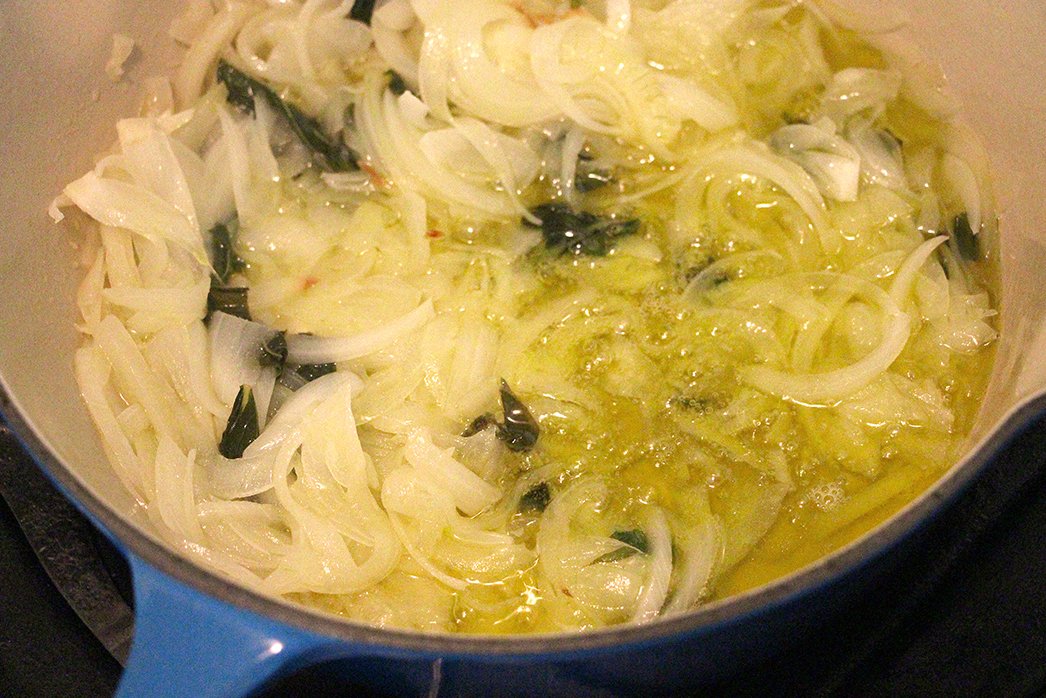 The dish is sometimes called Spaghetti alla Nerano for the town that inspired it on the Sorrentine Peninsula of Italy’s Amalfi Coast, where Antonio grew up. The story is that the dish was invented by Maria Grazia in 1952 in her eponymous restaurant in Nerano. With its azure waters, resplendent beaches, and towering cliffs to the sea, the Amalfi Coast is one of the most spectacular areas of Italy. But before its towns like Positano became popular with jet-setting Hollywood celebrities (Bogie, Sinatra) in the fifties and sixties, it was poor region. For summertime tourist traffic, the area is remote—its snaking roads cling to incredibly narrow, vertiginous cliffs that make for punishingly long journeys into the population centers. Instead of a steady stream of commerce, these spectacular cliff side villages had to rely on the fishing trade and carving narrow terraces out of the cliffs to establish flat spaces on which to grow produce and grapes. This Zucchini Spaghetti, an incredibly simple, but soulful dish is from the simple, powerful cuisine of necessity.

“For me, this pasta says Amalfi,” Antonio said as he quickly sliced four medium zucchinis into thin rounds. “I grew up eating it, because it was a dish of the summertime. Zucchini grows like crazy in the bright sun on the coast, and every house grows a ton of basil.” Indeed, basil is the primary addition to the zucchini, as its incisive, minty edge provides a piercing counterpoint to the squash’s soft, mellow base tones. Besides the pasta, the only other additions are some grated cheese (Antonio used Parmesan), a dash of butter, and some olive oil. 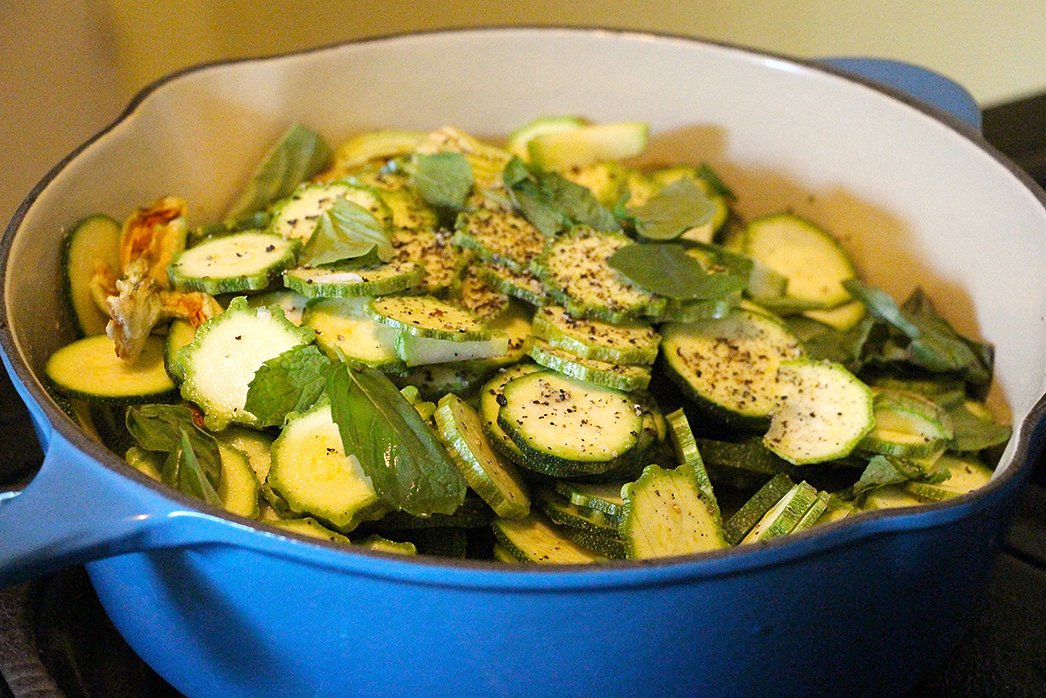 “This is the simplest, easiest version,” Antonio noted, “but it works pretty well.” While the pasta water is coming to a boil, Antonio begins cooking the onions in a large pot with the olive oil before adding the zucchini rounds. At first they sizzle, but he continues to stir them every few seconds as they start to release their liquid. “I’m cooking them down,” he says, “so the zucchini becomes the sauce.” He’s embracing the mushiness, turning weakness into strength, continuing to stir until about half the zucchini is broken down. He keeps the pot on low, letting some of the liquid boil off. When the pasta’s just before al dente, he pulls it out and adds it to the zucchini, along with the butter. A little bit of the pasta water goes in and the cheese, and he stirs it all until combined. The heat goes off and he stirs in the fresh basil, just before serving. With an Amalfi white, say a Falanghina, the dish is comfort food. This quick and easy dish is no place for a courgette—it’s all about the zucchini.

1. Boil a large pot of salted water.
2. In another wide-bottomed pot, add half the olive oil and warm over medium-high heat and begin cooking the onion, until it has softened a become translucent.
3. Add the zucchini and stir until it’s all covered in oil.
4. When water is boiling, add the spaghetti and give a stir.
5. Keep sautéing the zucchini until it starts to break down, letting some of its water boil away. There will still be some chunks, but some of it will turn to purée.
6. Just before the spaghetti is al dente (when it’s still a bit tough against your tooth), use tongs to pull it out of the pasta water and place it into the zucchini. Alternately, drain the pasta into a strainer, while reserving about a half cup of the pasta water.
7. Turn off the heat under the zucchini, add the butter and cheese, and toss the spaghetti until well integrated. You’re looking for a nice silky coating with the cheese-zucchini-butter emulsion. If it needs a little water, dash in the reserved pasta water until the desired consistency is reached.
8. Finally, toss in the garlic, mix it up and serve with a drizzle of olive oil and a sprinkle of cheese. 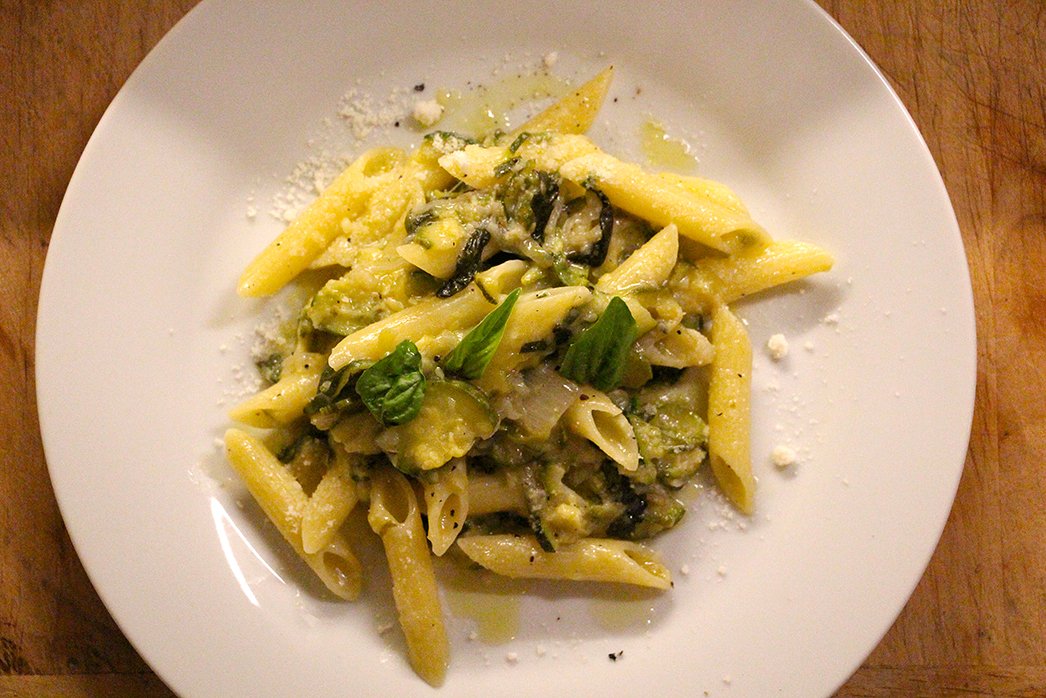 Wines that work
Here are some options that will heighten your cooking and eating experience.  All of which

Château Cremade – 2008 Palette Blanc: This top-notch pick for this dish comes from the tiny Provençal appellation, Palette, just within the city limits of Aix-en-Provence.  While this French wine is more often paired with courgette over zucchini, it will be a masterful pairing for this dish.  If you’ve ever been to the south of France, you know you will find just as much zucchini as you would in Italy.  $36

Domaine de La Vieille Julienne – 2013 Côtes du Rhône Blanc, ‘Clavin’: Following the theme from the south of France, this biodynamically-made white wine, principally made of Grenache Blanc and Clairette, is one of the greatest overachievers in southern French white wine.  We get only 20 cases for the entire west coast and they are a treasure to have around.  $26

Jean David – 2013 Côtes du Rhône Rouge: For a red, at only $17 retail, this complex and thoroughly delightful wine with a simple wine’s price will be impossible to beat.  Like many great wines, this organically farmed (since 1979!) offering needs a ten minute warmup to begin its entourage of sweet red flowers kisses, cranberries, red currants, pastry spices and fresh mission figs. The palate takes on the seriousness of this wine showing that it is not a mere Côtes du Rhône, but a wine finely-tuned with fresh acidity and polished, but refreshing tannins.