Masson and the Mountain, Part Nine of An Outsider at The Source 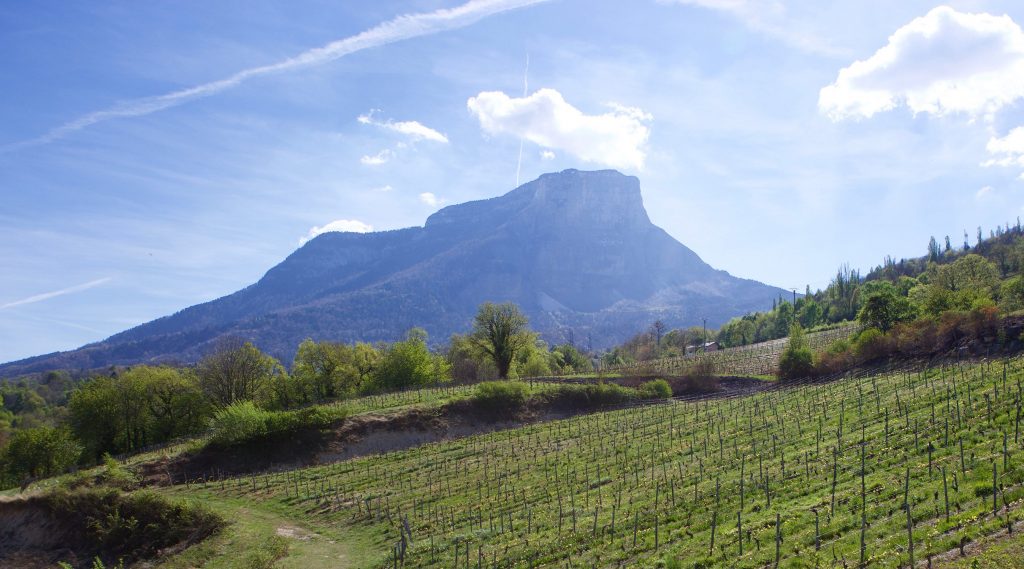 Just to the south of Apremont is Mont Granier, a colossal roughly-hewn trapezoid of limestone with a thick evergreen forest at its base. Its sheer cliffs suggest the usual erosion and fall away, but in 1248, the entire twenty-three hundred foot north face of the mountain broke off. The resulting rockslide rumbled across many miles, destroyed five villages and killed three thousand people. The limestone spread out and covered the surrounding terrain so that the lines of the Apremont appellation are actually drawn by the stones from the mountain. Beyond all this limestone, the surface soil has different types of metamorphic rock as well, such as schist.

Like the Jura, the Savoie has some grapes that aren’t usually grown elsewhere. Though the region also grows varietals such as Gringet, Altesse and Roussanne, wines in Apremont are exclusively whites made from Jacquère. Ted prefers the Jacquère from Apremont, citing its “electric charge,” a descriptor he uses often and one that really drives his selections. Jacquère is not known to be a great aging wine, but the producer we were going to see makes some that does so surprisingly well.

Jean Claude Masson came stomping down the stone steps of his contemporary two-story house that would have been at home in any Midwestern suburb. He let Andrea know where the facilities were and when I indicated that I could use them as well, he pointed up the hillside toward his vineyards. Ted translated his rapid-fire French: “that’s where the men go.”

He’s big and barrel-chested (and bellied) from years of playing rugby and drinking beer—not your usual wine snob. His face is deeply tanned and lined from spending decades in his fields and pursuing myriad other activities outside. He had a constant smile on his big round face, with its thin graying beard and a mischievous look in eyes.

Without a lick of English, he was constantly jocular, chuckling at all his punch lines in a contagious manner that made me laugh even though I had little understanding of what he was saying. Ted would translate and it was usually something self-effacing about his own whacky behavior, partying a lot when he was younger and his affinity for sports, all as he floored his SUV up the narrow winding dirt road without really needing to look at it. If opposing traffic came our way, he hit the gas even harder and the other car flinched and made way every time.

When Ted fired off questions about the soil and vines, Masson switched in and out of an earnest tone, while never losing that wry smile. Though he can come across as irreverent most of the time, I gathered from much of what Ted translated that he takes his craft very seriously.

As part of the natural wine movement, he uses organic, plant-based vineyard treatments that don’t harm the bees, the most important of all insects. He prides himself on being a free man who will do what he needs to do to survive, but aims for the highest of ideals in accordance with nature. While he isn’t confined to the strictures of organic certification, he tries to adhere to those guidelines as much as possible, without putting his business in danger, which can happen when emergencies like epidemics occur. But he added that people who always do whatever they want in the vineyard and the cellar are no different than those who misbehave all week, then go to church on Sunday to ask for forgiveness.

We got to the top of the hill where the bulk of his plots spread out on a rolling slope. There was an incredible view of the verdant valley below, beyond clusters of houses and countless more vineyards. Masson gestured to a bush and said that’s where I could do what I needed to do. As I excused myself, I wondered if all male guests were encouraged to take care of business out in the vineyard. Maybe out of sheer masculine principle, because we can.

When I returned, Masson was pointing way off to the south at our right where loomed the rock of Mont Granier, the mother of all the soil beneath our feet. He then gestured down the valley, recounting the history of the catastrophic slide. He and Ted talked about it like a favorite old subject that one never minds repeating with someone who knows it well, in case some uncovered piece of information might be exchanged. They both spoke with a sort of reverence reserved for those who never lose their awe of something so monumental.

Ted put his loupe to his eye and held a piece of limestone up close as Andrea shot photos of the land, vines and Masson from every angle. Masson mugged for the camera and also did his fair share of ignoring it as he watched Ted with amusement; he seemed to be one of the producers who’s a little mystified by Ted’s intense enthusiasm for geology. 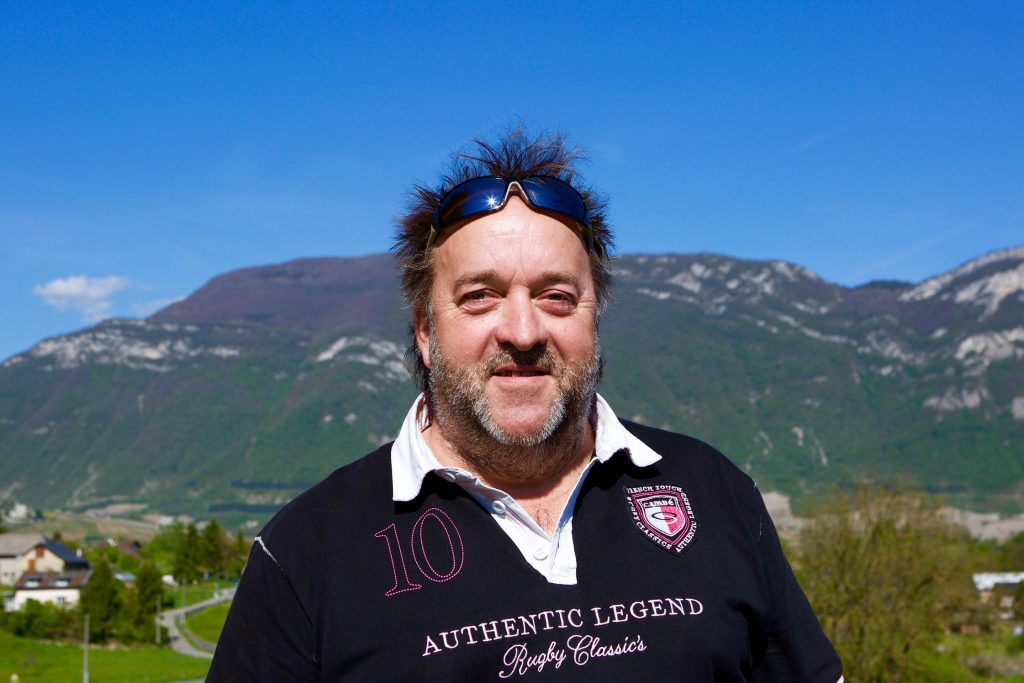 He pointed out a couple of plots he had recently purchased and talked of new vines that he would plant in the coming year. With a quick drive across the hill and down, he showed us a few more of his vineyards and pointed out a rock the size of a big house covered in graffiti, which struck me as incongruous out in the middle of that grassy field. It was a piece of Granier that somehow ended up there in the slide, rolling for many miles, who knows how fast, crushing everything in its path—a thrilling thought.

Next: Masson the Caveman