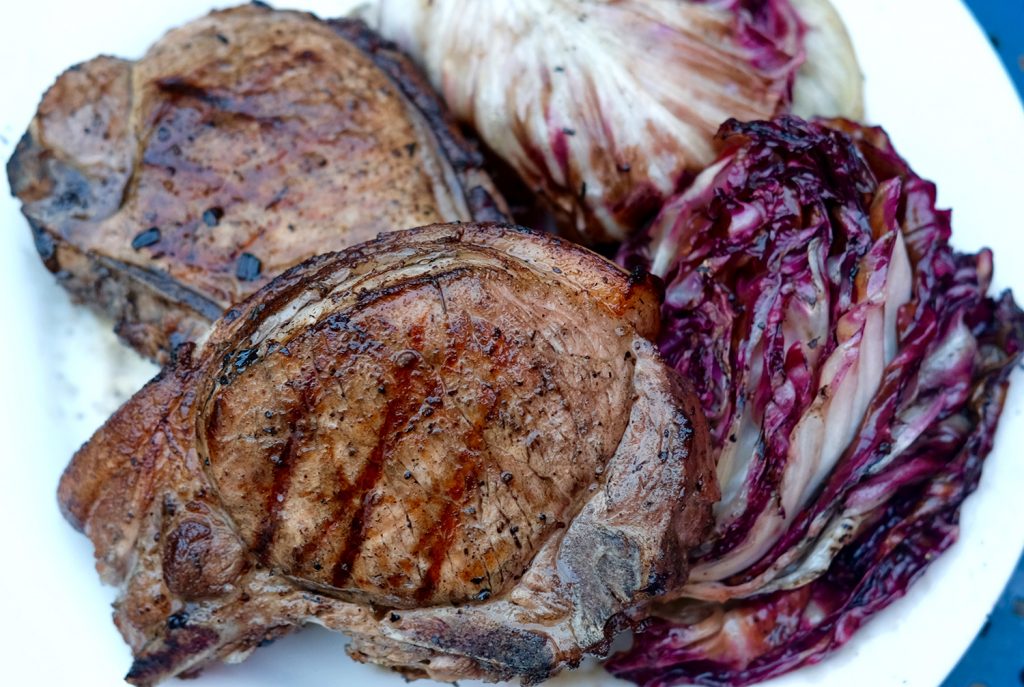 Years ago, one freezing February in Friuli I pulled into the town of Gorizia, near the Slovenian border. I was bundled up tightly, as the temperature hovered around forty degrees, which made me all the more surprised to find the town square packed with people, eating, drinking, and making merry. I approached, curious to find out what could be causing this improbable, wintry revelry, only to discover just as unbelievable a source: Radicchio. I had happened on the festival for Rosa di Gorizia, a highly prized version of radicchio, which, when its leaves are pulled back, resembles a rose. Hundreds of people, wrapped in coats, scarves and hats drank wine as vendors tending outdoor kitchens couldn’t grill and fry these lovely magenta vegetables fast enough.

Italians revere what we fail to appreciate in America, where radicchio languishes primarily as a streak of color in green salads. They revel in its versatility. They roast it, grill it, deep fry it in batter, caramelize it, cut it into ribbons and toss it with pasta, they stir it sweetly into risotto. Radicchio perfectly articulates Italians’ famous predilection for bitterness, which we simply don’t share. Cookbook writer Barbara Kafka explained more about it than I ever could back in this 1988 Times piece. So, I won’t belabor its culinary genius. Rather, I’ll mention something that never gets brought up: Radicchio is brilliant with wine.

Simultaneously sweet and bitter, tender and crunchy, Radicchio is remarkably able to be two things at once. This ability to resolve contrasting elements not only provides a native complexity, it makes radicchio an ideal intermediary between plate and glass. Many wines, red and white, have a tinge of bitterness. Often we fail to note this or comment on it, because it usually expresses itself fleetingly in the finish, and we tasters tend to focus more on sweetness, fruit, spice, acid, and tannins. Unsurprisingly, Italian wines, more than any category, consistently express a bitter note. Look for it in most wines, but to give a few examples: Verdicchio and Vermentino, Sangiovese and Nebbiolo, Fiano, Aglianico, Nerello. The list could go on for pages. French wines are no strangers to bitterness; see Loire wines, red Burgundy, Beaujolais, Alsace, Rhone reds and whites.

In pairing food and wine, we love to connect to a wine’s fruit. But having something on the plate which reaches out to a wine’s slight bitterness completes the relationship. Radicchio is that liaison. Cooking it also brings out its sweetness, making the match doubly appealing. While strong in flavor, radicchio is lighter in texture, making it, in my opinion, ideal for wines at the lighter end of the spectrum: red Burgundy, Nebbiolo, and Cabernet Franc from the Loire. I prefer the Old World versions of these wines with radicchio, simply because New World ones, in their joyful emphasis on fruit, lack that bitter note.

Below find a simple recipe for pork chop and radicchio, both grilled. This is a dynamite meal to have with a red Burgundy or any Nebbiolo from Piedmont. Look for thick-cut pork, with meat as purplish and dark as possible, which indicates more flavor. While the pork marinade calls for a habanero, have no fear; it doesn’t really introduce heat, more just a hint of chile flavor. But as delicious as is pork, the magenta-hued chicory is the real star here.

Two thick-cut Pork Chops, the darker the meat and fattier, the better

1 Large Head of Radicchio (or two smaller ones)

Juice of 1/2 lemon—about an ounce

Finely mince the habanero and mix it with the thyme leaves and garlic then stir in the lemon juice. Toss the pork chops in this mixture and let sit for 1-2 hours.

Whisk a tablespoon of white wine vinegar with two tablespoons of olive oil and salt and pepper to taste. Set aside.

Cut the radicchio into thick wedges, leaving the core intact so the leaves stay together.

To prepare the grill, create a coal bed large enough in area to match the area of the pork chops. The coals should be hot, but not too hot—aim for no-hotter than a four-count with the hand above the coals.

Salt the chops before placing them on the grill. Grill on both sides before standing them on their edges to brown the outer ring of fat if there is one. Finish by standing on the bones and grilling for another 3-4 minutes. Internal temperature should be about 130° F when you remove from the grill (for medium rare).

Allow the meat to rest by standing the chops together on their bones. While they rest, toss the Radicchio in the vinaigrette and spread them out over the coals, which should be slowly cooling down. Don’t move the radicchio sections until you turn them (to keep them from falling apart). They are finished when a bit of char begins to appear, but don’t let them get thoroughly burned.

Arrange the two on a plate and serve with a Burgundy or a Nebbiolo from Piemonte.

Wines to pair this dish with: 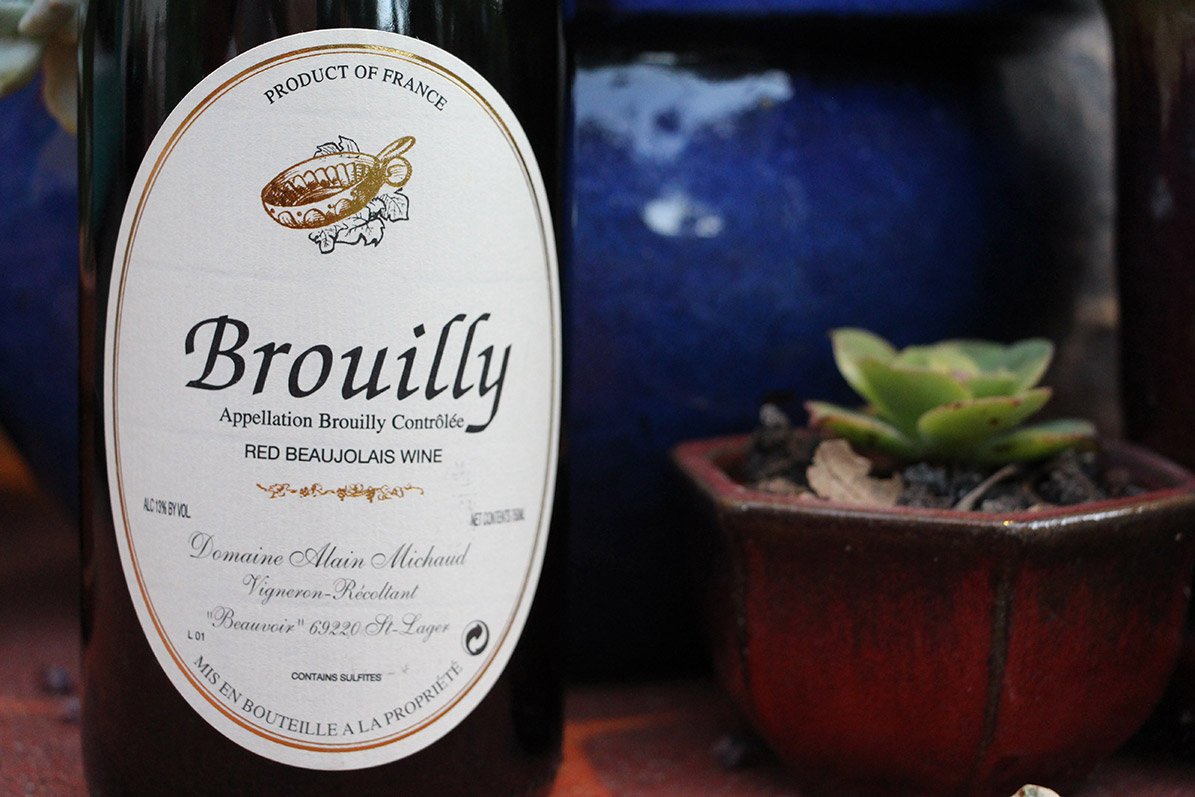 2014 Alain Michaud Brouilly – Beautifully combining serious Beaujolais’ ability to merge cheerful fruit with a more structured, mineral character, Alain Michaud’s Brouilly sets the standard for that cru. Here, it brilliantly picks up the hints of char and smoke, nestling them in its earthy/fruity embrace.

2013 Demougeot Bourgogne Rouge – One of the rising new talents of the Côte de Beaune, Rodolphe Demougeot makes both white and red wines of impressive quality. This Bourgogne Rouge delivers exactly what such a wine should—buoyant red fruit on a smooth palate that goes down with delightful ease. A hint of leafy earthiness in the finish is what will bond with the radicchio’s mild bitterness.

2012 Poderi Colla Nebbiolo d’Alba – Tart cherry, orange zest, floral high tones—this basic Nebbiolo from the Colla family has all the seductive flavors and aromas we expect of the grape. Pleasantly round and mid-bodied, it brings some gentle tannins into play, perfectly complementing the pork and radicchio.