Of Corse, Part 2 of 9: Patrimonio and the Rebirth of an Old Domaine 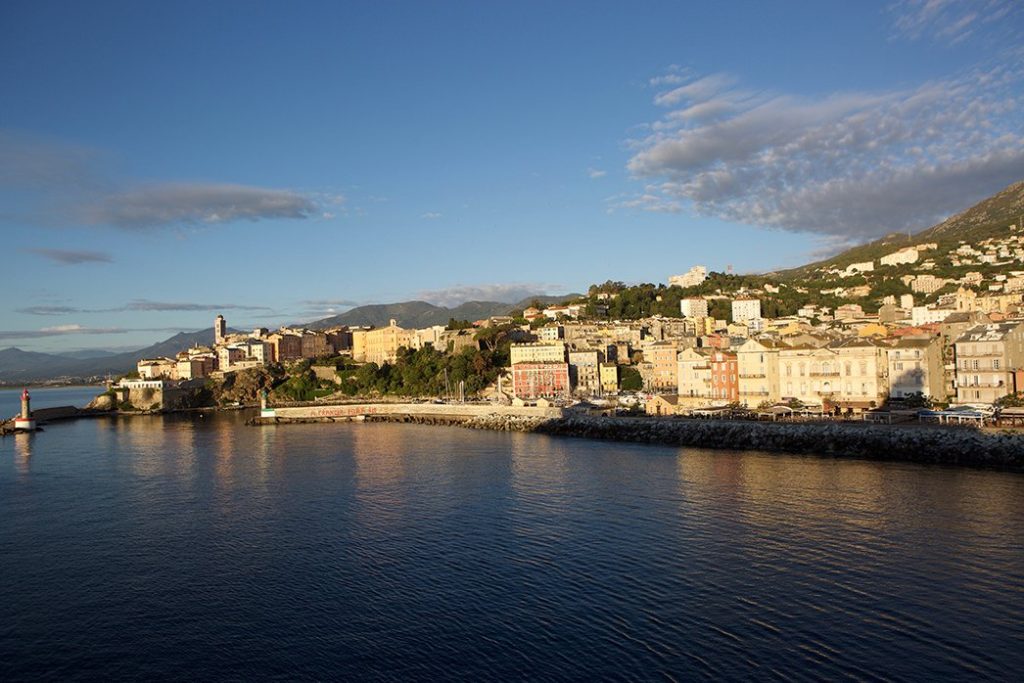 As we drove Manu’s truck off the ferry we began our ascent from the base of the mountains to the west of Bastia. A crooked road led us up and out of the town with high walls of deformed schist to our right, black from the previous night’s rain, bent in every direction. The fog was dense and flowed like a river in the strong and unusually cold wind. We hit the top of the pass with nothing to see but a dark, wet road and softly brightened fog. It was a stark contrast to last year’s welcoming first sight of the ancient village of Patrimonio and the dramatic limestone ridges of Monte Sant-Angelo, framed by a bright blue sky and the sea in the background. 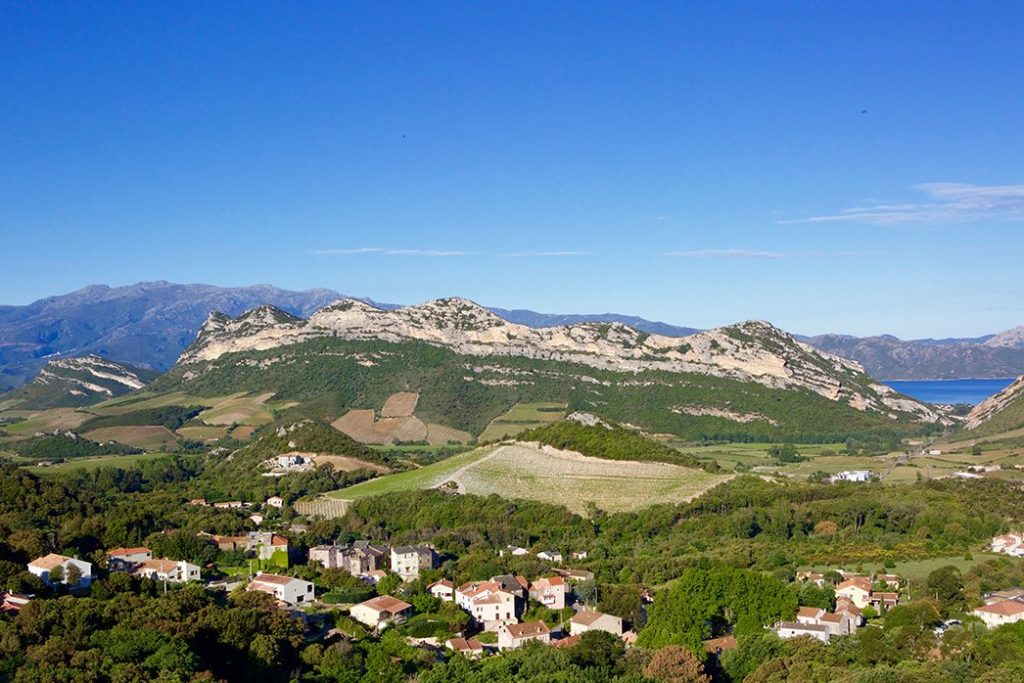 As we descended the western side of the ridge, we passed a graffiti tag on a schist guardrail that read, “tourists go home,” in thin red spray paint. I remembered it from last year—apparently, the locals are okay with keeping it there, and ironically, I kinda was too. The unmistakable limestone ridge that sits between the beach town Saint Florent and Patrimonio finally popped through the fog. As we entered Patrimonio, we saw the old church tower and passed a red trim white village sign that read, Patrimonio, which had been blacked out with spray paint. Patrimoniu, the Corsican name for the village, was spelled out below, tag free—a common mark of the village signs on the island.

Patrimonio may be the most geologically complex wine region on Corsica. The vineyards are a mix of limestone, schist and granite—three of the greatest bedrocks and soil types for wine growing—with a range of soil grains from clays, silts, sands and gravels. Vines are planted on soft sloping hills, down in former riverbeds and up on extremely steep hillsides. This massive variation makes for a broad patchwork of smells and tastes that usually combine under one name, Patrimonio, the first AOC (1968) established on the island.

Patrimonio white is made exclusively from Vermintinu, the island’s top white wine. It’s a salty, minerally, spicy textured wine that smells like the sea. The lovely and complex rosés are a blend of Niellucciu (75% minimum to call it Patrimonio) with other red grapes as well as Vermintinu. Red Patrimonio is always led by the powerful and rustic Niellucciu, often blended with small quantities of Sciacarellu, a red grape that makes the most complex elegant reds on the island, and/or Grenache to bring more charm. 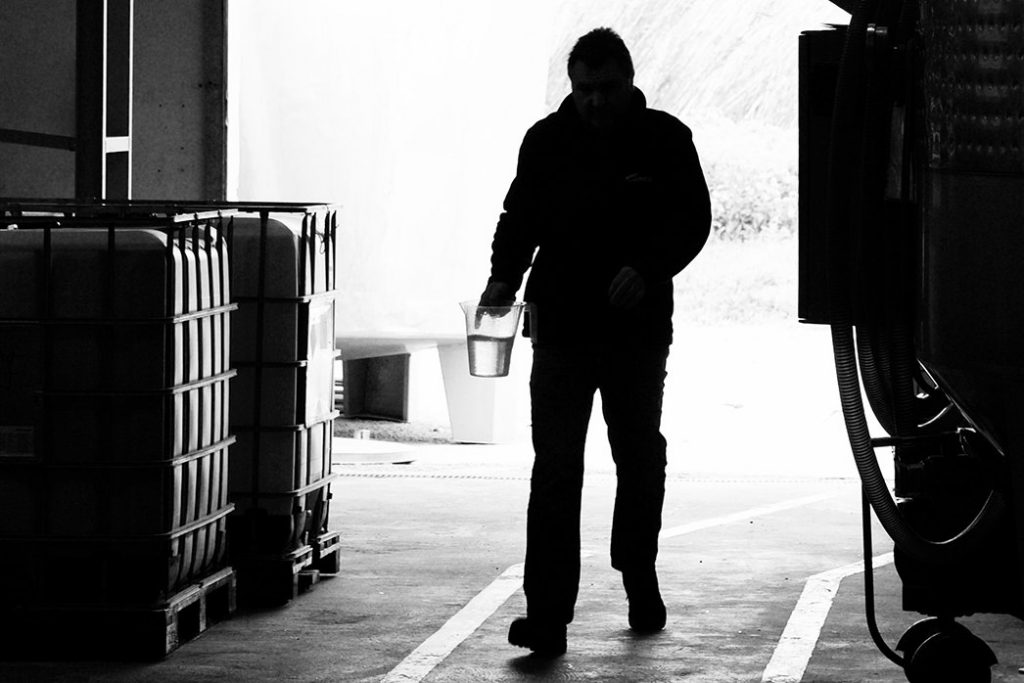 Our first visit was with a domaine that still had problems with “stuck fermentations” on some 2017 reds. This can happen when there is too much sugar in the grapes, which results in high alcohol levels, and the yeast begins to die before all the sugar is converted to alcohol and CO2; there are many studies and opinions as to what the threshold of a wild/natural yeast is, but it seems that over potential alcohol levels of 14% the risk is high. With too much leftover sugar and no active yeast, other microbes start to eat the sugar, and one of the more famous “bugs” is the spoilage yeast, Brettanomyces, which smells like an old barnyard with all its less than desirable nuances. Volatile acidity, unintended premature oxidation and many more challenges can arise, potentially making the wine more unstable, less attractive and scarred by these early problems.

The winemaker didn’t have much time so we went through only the most difficult wines, and none of the good ones. Some were ticking along, while others were dead in their tracks, exchanging freshness for early fatigue. This is one of the big challenges of 2017, and Manu was there to advise his vignerons on how to navigate these kinds of problems.

Our second visit at Muriel Gaudicelli’s tiny biodynamic domaine was more convincing because their 2017s seemed to be going just fine. We tasted with her husband, Stéphane, who works with her every step of the way. The wines of the past were already very good, but it seems the newer vintages have taken a leap forward with Manu on board. The new results show a great balance of power and elegance, enough for them to be picked up by Kermit Lynch, a US importer who seems to nearly have a national monopoly on Corsica’s best. It was an enlightening tasting compared to the last year, which I partially attribute to my lack of experience with the wines of Corsica up to that point rather than simply the jump in quality.

We stopped for a quick lunch in Saint-Florent, a charming village that sits on the Golfe de Saint Florent. I was again desperate for veggies and fish but the only thing that seemed worthwhile on the menu (at a reasonable price!) was the cannelloni stuffed with Brocciu, a local fresh cheese similar to ricotta. Turns out, it was the perfect kind of warm comfort food for this relentlessly cold and windy day.

Our stop after lunch was with Lisandru Leccia. He took over his family’s estate, Domaine Leccia, in 2014 and has already made large strides in the right direction. We had an appointment at two o’clock and arrived early. Out in the vineyards we saw some guys operating a tractor, with one driving and two directing the plow blades behind it. Manu said that even though he’d never met Lisandru, he knows his father and that the bald guy out behind the tractor was likely him. As we started out to the vineyard, we were met by Lisandru’s aunt, Annette Leccia, a woman with an unforgettable smile and warm energy.

Lisandru is a near carbon copy of his father, Yves. Both have sharp features, a shiny bald head and dark, thick eyebrows, a quiet demeanor and in Levi’s blue jeans. I met Yves Leccia in Paris two years ago while on tour with my friend, Nicolas Rébut, his sales agent there. We had dinner two nights in a row and I was immediately fond of him. Yves is gentle and hospitable, and meeting his son Lisandru was like meeting him again, when he was younger.

Lisandru took us for a tour of his simply designed cellar and talked about the changes he wanted to make to the domaine, including more work with biodynamic principles, starting with the incorporation of higher level organic farming. The wines we tasted out of tank (2016, 2017) showed clear promise and the red was a lot more elegant than what I associate with Patrimonio, despite it being 100% Niellucciu grown on clay and limestone soils—three ingredients that can easily make more of a beast than a beauty. I have no doubt that Domaine Leccia will rise again and become one of the top domaines in Patrimonio. Lucky for us, Jerome Brenot, The Source’s resident Grenouille, sniffed that one out at the beginning of the domaine’s renaissance and we’re now importing his wines.

Next Week: Of Corse, Part 3 of 9: Josée and the Alérian Plains