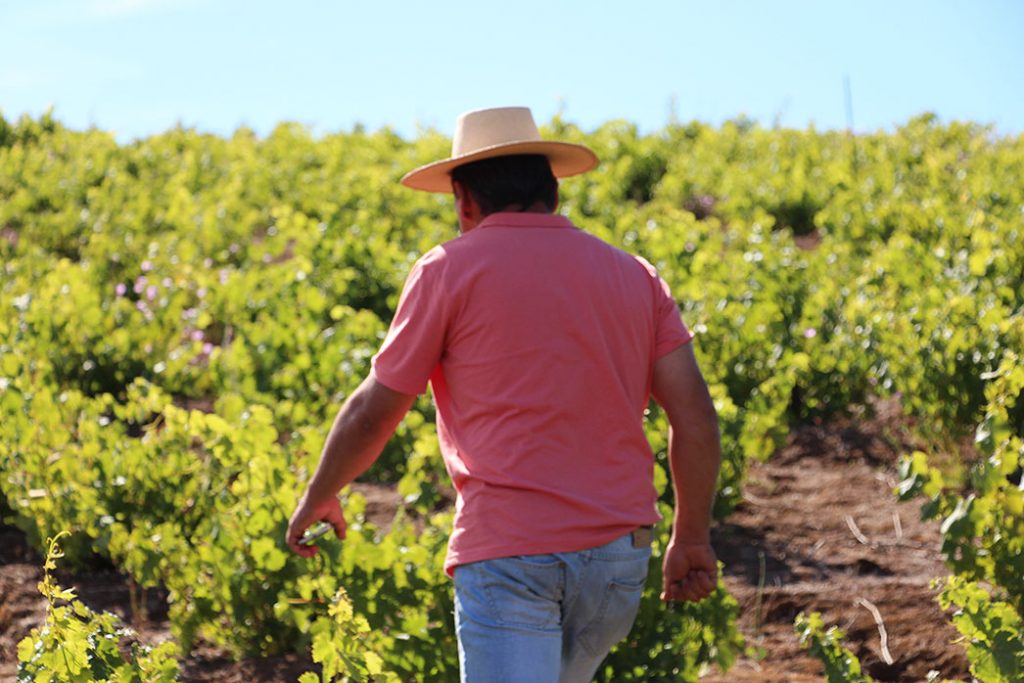 “You need to find the proper mother for your wines… and a vineyard’s geology is the number one consideration,” Pedro said, as we drove towards his vineyards in Guarilihue.  What was true 450 years ago when the Spanish Conquistadors settled in Concepcion is still true today.  They recognized that Itata was a perfect mother for their vineyards because of the soil and climate, so they quickly established their roots in this place.

“I chose this place because after working so many years with my clients, I knew exactly the places I hate.

Back on one of Chile’s many dirt roads, we followed Juan Carlos Torres, another vineyard owner. I asked Pedro why he chose the Itata to establish his family’s label, Pedro Parra y Familia. Why didn’t he go further south into even cooler coastal climates closer to (but not in) Patagonia, or higher elevation sites in the Andes? After a moment of contemplation, he said, “I chose this place because after working so many years with my clients, I knew exactly the places I hate.” 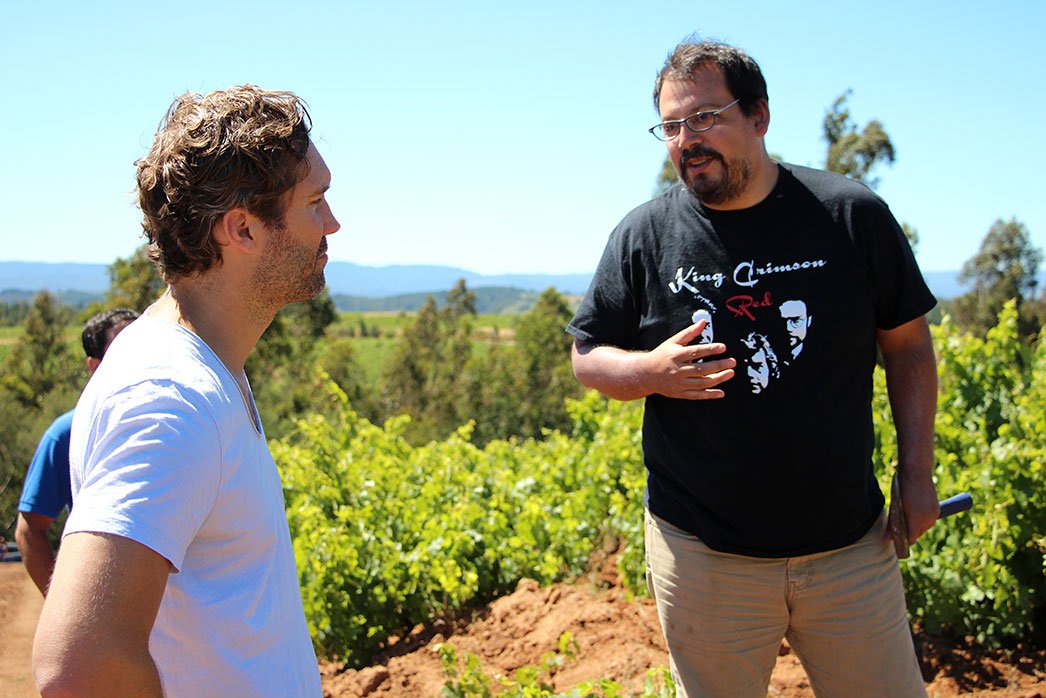 “I have a map in my head of places where I know there is no solution,” he added. “I know that even if we bring in a super skilled winemaker, a place can be too strong to make a balanced wine. For example, granitic soils can be found all over the coast of Chile and up north, even in Casablanca. (A link to that part of the story can be found here). But as you know, the natural ripeness of Casablanca can be 16% alcohol, or more. I don’t want to add water or acid to my wines; that’s not what I like to drink… That is the first point.

“The second point was that I knew I needed green land, which means both rain and clouds. It’s not about good year-round temperature; it’s about having cloudy weather in the beginning of the growing season, and in the end [toward harvest]. It’s only in the middle when I need the sun.” 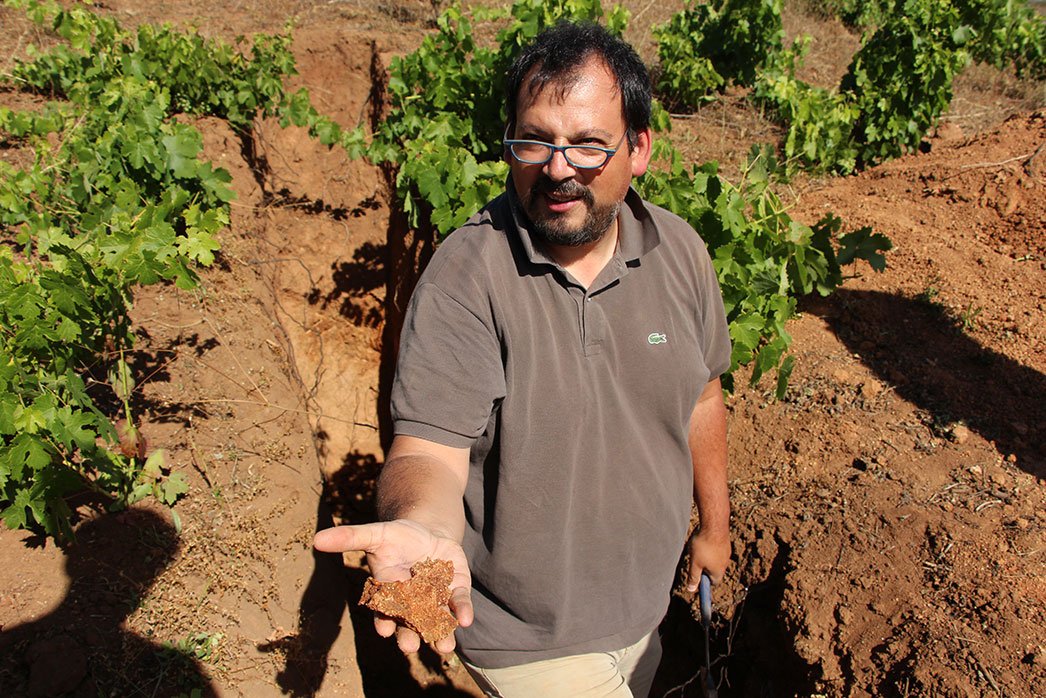 I suspected his third point, and I was right… He said, “We don’t have limestone in Chile. It’s too bad because I love limestone. So, if it’s not going to be limestone, it’s going to be granite, which I have the best in the world, and I love it. So, once I found the granite, I had to find more cloudy than sunny weather.”

“I have dug thousands of pits in my life and I know very well the difference between irrigated roots and dry-farmed roots.” – Pedro Parra

The last point Pedro made was similar to one of the staples of French wine law: no irrigation. “I have dug thousands of pits in my life and I know very well the difference between irrigated roots and dry-farmed roots. If my clients want to irrigate their vines, that’s fine, but not my family’s wines… ever.” 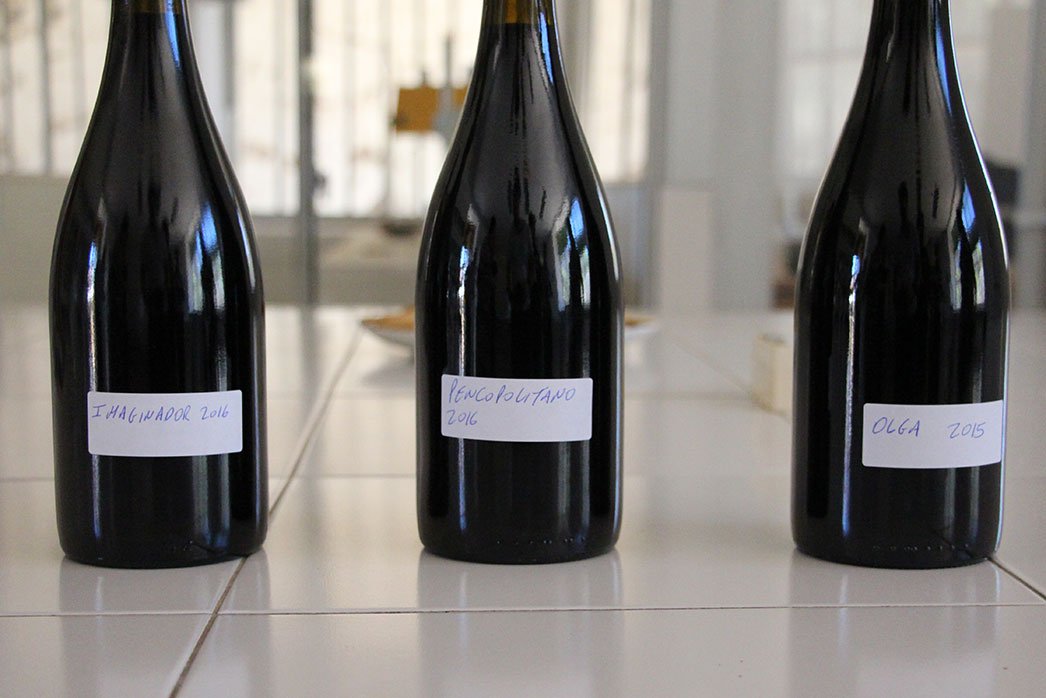 When we were tasting at Pedro’s winery, both of the other importers in our group, Dirk and Jorge, started to prep me for meeting another talented Chilean winemaker, Leonardo Erazo, a good friend of Pedro’s who had worked with him in Argentina and on many other projects. They insisted that I should consider tasting Leo’s wines and import those as well.

As we wound up a very rocky dirt road, we took a final turn and eventually stopped on top of a hill. Down a little vineyard path a few people emerged from a makeshift pergola constructed out of small trees. Gusts of wind blew through the open sides, and the wooden roof was covered with greenery. It kept the sun from beating directly down onto the table where Leonardo and his Belgian girlfriend, Zjos were waiting. They joined us on the walk further up the road, through the intense wind and into the last vineyard of our tour. As always in Pedro’s vineyards, we came upon another soil pit. 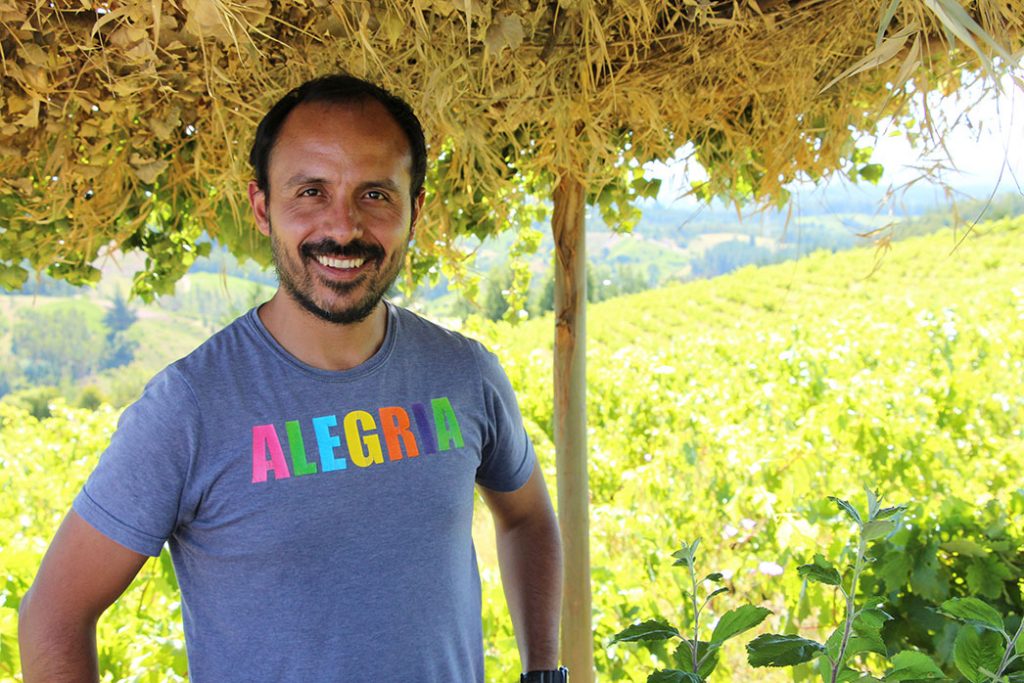 Up to this point, we had spent a lot of time talking to Pedro almost exclusively about granite with a little on limestone sprinkled into the conversation. I learned the day before that he wasn’t a big fan of volcanic soils, so I didn’t bring it up too much.

I like wines from volcanic soils. But it’s necessary to have the right grape varietals planted to express their magic.

I like wines from volcanic soils. But it’s necessary to have the right grape varietals planted to express their magic. Much of the time they mark the wines as distinctly as any soil type, especially from many of Italy’s wine regions, like Sicily or Campania. Volcanic soil is found all over the world, and the dominant “international grape varietals” like Cabernet Sauvignon, Chardonnay, Pinot Noir, Syrah and Merlot in New World regions are often planted on them. More often than not, grape varietals are chosen for commercial reasons, not specifically because they are ideal for a particular type of soil. That’s what makes the wines of Lacryma Cristi, Taurasi, Etna and other southern Italian wines so special: they’ve established extremely suitable grapes on the right soils for centuries or, in many cases, for millennia.

Standing over the pit next to Pedro, Leo drew comparisons and articulated the differences between volcanic and granitic soils and their influence on wine.
“Basaltic [volcanic] and granitic rocks are igneous [both were once molten, but granite forms underground, while basalt forms above ground after an eruption], but their constitution is very different because of the way they cool. The slower the cooling, the bigger the crystals,” Leo explained. “Granite has bigger crystals, which you can see without a magnifying glass, unlike the tiny crystals in a basaltic rock.

“The weathering [a geological term for the breakdown of rocks] is quite different, and the result in the wine is different too. With granite, depending on how much they have weathered over millions of years, there can be a lot, or a tiny amount of clay. The hardest mineral in granite is quartz, and it will be the last mineral to weather, leaving it almost completely intact.” Other minerals such as feldspar and mica will weather sooner.

“Wines from here made from volcanic soils are softer, more linear and delicate; granite makes wines that are more wide and round.” – Leonardo Erazo

Leo continued, “the richness and water holding capacity of weathered granite is totally different than basalt. In the Itata when the basalts weather they become sandy, and the granite becomes more like clay. Wines from here made from volcanic soils are softer, more linear and delicate; granite makes wines that are more wide and round.” 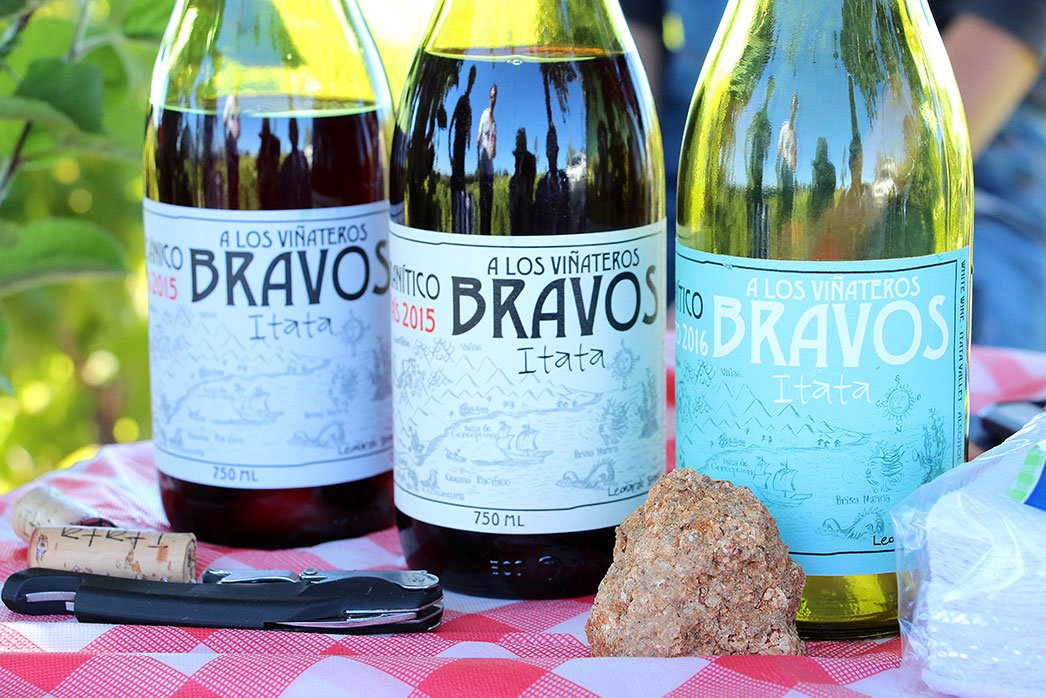 Going deeper into the smell and taste of these wines, Leo explained that the mineral sensations are different as well. In the back palate, granite is stronger (similar to metamorphic rock) and gives a rich saline and iodine sensation with a firm impression of iron; it tends to give more structure and tannin to the wine. The Itata’s sandy volcanic soils render more finely structured wines in comparison to granite. The aroma gives the impression of volcanic cinders and sometimes the phosphorus from a match. “The delicately textured tannins of volcanic wines carry the flavor to the very end of the palate,” Leo added.

Up to that point in my travels through many granite vineyards in Europe, I had never seen any so weathered into clay as in the Itata.

Up to that point in my travels through many granite vineyards in Europe, I had never seen any so weathered into clay as in the Itata. Normally, I smuggle rocks back into California to add to my collection. If I had taken a piece back from some of these vineyards, I would have brought back what looked like rocks, but with a little time, they would dry and crumble on the mantle of my fireplace, since they were really just compacted pieces of soil,. 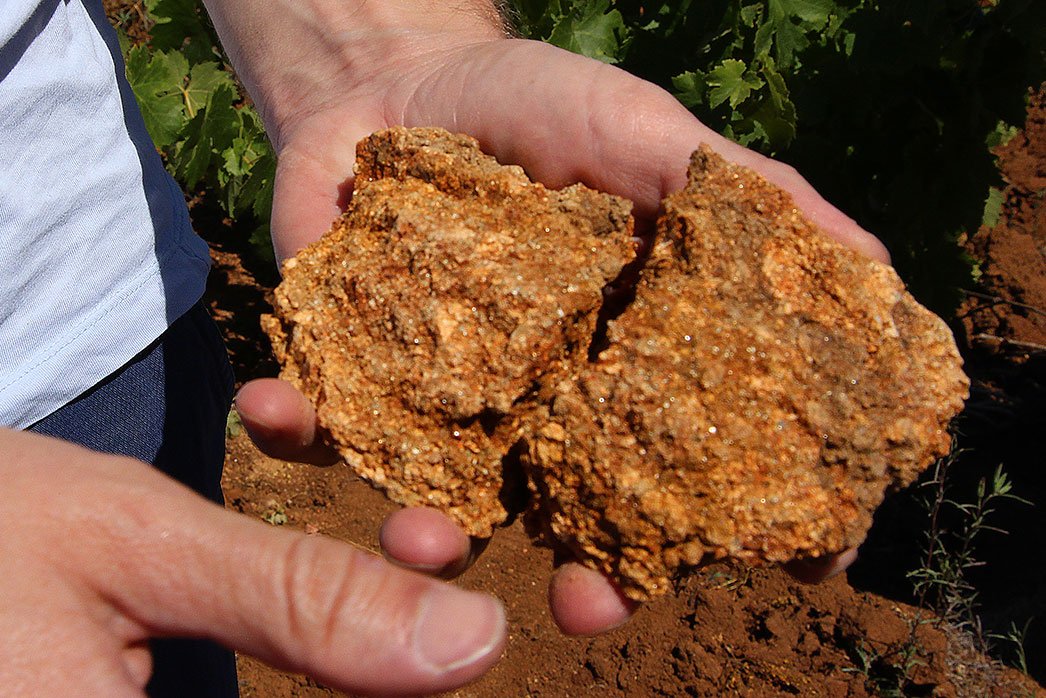 Leo explained that there are granitic vineyards in the Itata that have hard, rocky soils, and others that are unusually soft. Granite is made up of a mix of minerals: mostly quartz, mica and feldspar. Depending on the amount of each component in the granite, the soil could be more or less susceptible to weathering.

Clay content in the soil plays a big role in a wine. During the winter and spring, rainfall swells the clay, and in the arid summer it shrinks and contracts, potentially tearing roots and stressing the vine. Leo explained that the response of the vine to any kind of stress is to produce phenolic compounds to protect itself and the result can be hard (green) tannins. In the Itata, the result is that granite soils tend to make more tannic wines than sandier volcanic soils. Leo made it a point to say that this may not be true of volcanic soils worldwide, but it is in the Itata.

The last segment of this 6-part series, “A New Discovery” will post next week.

To keep up with this story you can sign up to our email list, or check in next week and you will find part 6.